Young children among at least 100 migrants arriving in Dover 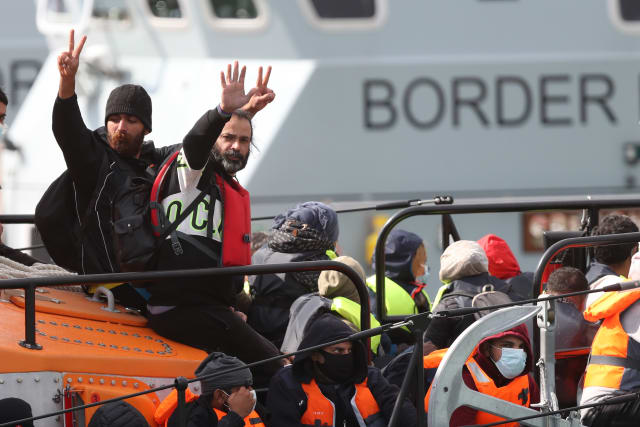 Sunshine over the English Channel and calm seas have seen a surge in migrants reaching the UK on Wednesday.

At least 100 people were brought into Dover on Wednesday morning, packed aboard Border Force patrol vessels and sitting on lifeboats.

Some of the suspected migrants smiled and waved as they arrived into the busy port while others carried toddlers too young to walk.

There are also multiple reports of people landing on beaches in Kent.

The issue of small boats crossings is due to be discussed in the House of Commons later.

Lashing winds and choppy seas brought on by Storm Francis at the end of August made crossings impossible for several days, but conditions have improved in the first two days of September.

Wednesday has seen bright sunshine and winds under 5mph in Kent, with temperatures expected to reach 18C.

The Home Office has yet to confirm how many migrants successfully crossed to the UK on Tuesday.

More than 1,450 migrants made the crossing by small boat in August despite a vow from Home Secretary Priti Patel to make the dangerous route “unviable”.

Immigration officials at the port of Dover were busy on Wednesday morning, with dozens of migrants waiting aboard Border Force vessels and lifeboats in the harbour.

Among their numbers were adults carrying young children.

After waiting to be brought ashore – some for about an hour – the migrants were led up the gangway towards the Border Force processing centre.

Once ashore, they will be assessed for symptoms of coronavirus, as is protocol.

Several empty dinghies with outboard motors attached were also seen being towed into the port throughout the morning.

Border Force and the RNLI remain active in British waters with French marine patrol boats active on the other side of the Channel.