Extinction Rebellion protesters say they are ‘impossible’ for Johnson to ignore 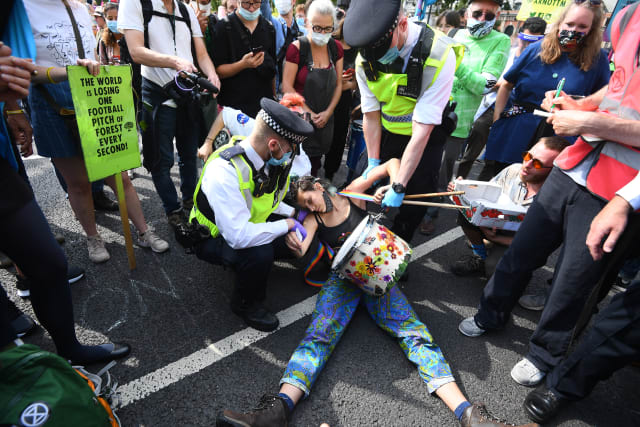 Climate change protesters said they are “impossible for Boris Johnson to ignore” as they began a second day of action in central London.

Hundreds of Extinction Rebellion (XR) supporters gathered in and around Parliament Square as Mr Johnson headed into the House of Commons for Prime Minister’s Questions on Wednesday.

Activists carried banners, banged drums and chanted as many spilled outside the stipulated protest area and blockaded Great George Street.

Crowds cheered in solidarity with those arrested by police for refusing to heed warnings that they would be detained if they did not move.

Others appeared to let their bodies go limp or simply looked away as police warned them to move within the protest area outside Parliament.

XR spokesperson Tamsin Omand, 35, from London, told the PA news agency that protesters wanted the Prime Minister to see and hear their action.

Mx Omand said: “The climate and ecological emergency has to be the absolute priority – how we are going to transform society into one that is fit for the crises we are already experiencing and the ones coming down the road.

“We are seeing a Parliament that has failed on every count – Boris Johnson wasn’t even around for the first Cobras (of the coronavirus pandemic), so if that is the attitude he is going to take to the climate and ecological emergency we are in dire straits.

“Disruption is a core tenet of how XR works and how we have managed to achieve so much in a short period of time.

“We have been outside Downing Street blocking his route on both sides and of course he’s encountering us here in the square – I think we are impossible to ignore.”

They added: “Our message to Boris Johnson is that he’s really the last Prime Minister who can do something, that can take the action required to set us on a new course. He’s got a new son – he needs to think what the world will look like in 20 years.”

He said: “I’ve been a doctor for 20 years, I qualified from Guy’s and St Thomas’ Hospital that sits directly opposite Parliament, and if you told me 20 years ago that I would be doing what I’m doing now – non-violent direct action to try and get the Government to act in a reasonable way to the threat of the climate and ecological emergency – I would have told you ‘That’s crazy, of course they have that in hand.’ They don’t.

“Every day doctors and healthcare professionals use science – if we don’t do that it’s negligence.

“We have a duty to keep our knowledge up to date, treat our patients as best we can. What we have now is a situation whereby the science has been crystal clear for decades – yet we’ve had decades of inaction.”

The Metropolitan Police said 160 arrests were made, as of 11pm on Tuesday, for offences including breaching public order conditions, obstructing the highway, obstructing police and assault on an emergency worker.

Further protests are planned around the country during the rest of this week and into next.

Last year, more than 1,700 arrests were made during Extinction Rebellion’s 10-day “Autumn Uprising”, which saw major disruption across the UK.