Nearly 1,500 migrants made journey to UK in small boats during August 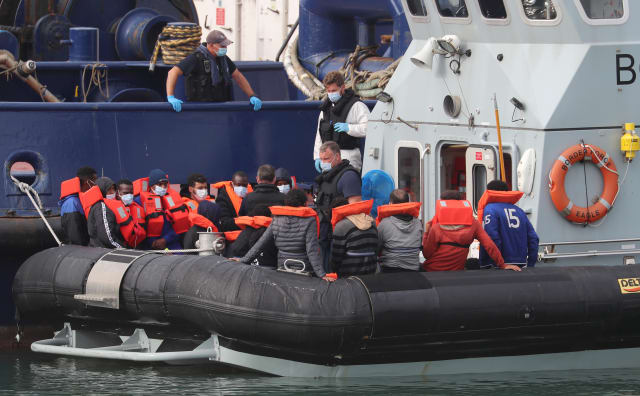 More than 1,450 migrants arrived in the UK by small boats in August despite a vow from Priti Patel to make the dangerous route “unviable”.

In recent weeks the Home Office has sought to blame French authorities and “activist lawyers” for rising numbers of crossings and difficulties removing asylum seekers once they arrive in Britain.

But despite the deployment of RAF planes and the appointment of a clandestine Channel threat commander, large numbers of people have continued to attempt the perilous crossing.

More suspected migrants were seen arriving in the Port of Dover on Tuesday morning and Border Force remains active in the English Channel.

The news comes after the Ministry of Defence (MoD) announced that a drone used in Afghanistan is to be deployed to the Dover Strait to help monitor crossings.

Charities have continued calls for the Government to establish safe and legal routes for migrants to claim asylum instead of crossing the Channel in small boats.

More than 1,450 migrants are known to have reached the UK in small boats in August, data analysis by the PA news agency shows.

This is believed to be the record for a single month and is almost as much as June and July combined.

In January 2020 just 94 migrants successfully made it to the UK across the Channel, but better weather and increased success appear to have led to a spike in crossings in the summer months.

Last month also saw a new single-day record for migrant arrivals set, with at least 235 migrants making it to the UK on August 6.

This is despite Home Secretary Ms Patel’s vow last year that the crossings would be an “infrequent phenomenon” by now, and her recent pledge to make the route “completely unviable”.

They were seen being ushered out of the cabin onto the back of the vessel where they were given life jackets.

Immigration officials in yellow jackets then helped them ashore one by one and escorted them up the gangway.

A dinghy believed to have been used to cross the Channel was seen being towed into the harbour shortly after.

Border Force, the RNLI and French authorities remain active in the Channel with more arrivals in Dover possible later on Tuesday.

On Monday the MoD confirmed that an Army drone previously used in Afghanistan is to fly over the English Channel to monitor migrant boats as the crisis continues.

It is the first time the Watchkeeper unmanned air system, which has been used by the Army in Afghanistan, will fly in the UK operationally.