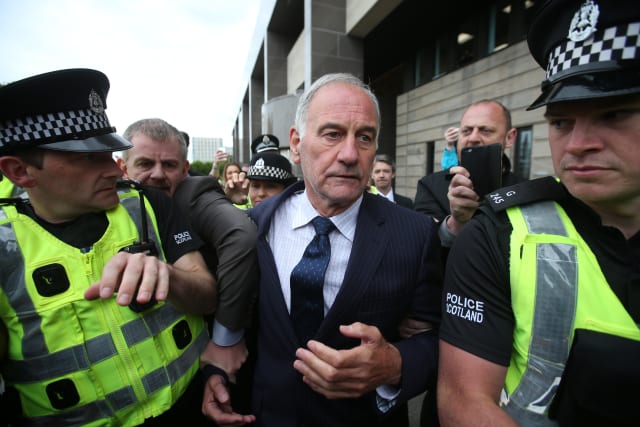 A former chief executive of Rangers FC is to receive a public apology from Scotland’s senior law officer, who has admitted he “should never have been prosecuted” in connection with his takeover of the football club.

Charles Green will receive damages as well as the apology from Lord Advocate James Wolffe after what his solicitors, Jones Whyte LLP of Glasgow, described as a “damaging, traumatic and stressful life event”.

It says: “I write to intimate that we are now in receipt of instructions on behalf of the Lord Advocate to attempt to negotiate settlement of the above action.

“The Lord Advocate intends to issue a public apology that Mr Green should never have been prosecuted.

“In addition damages will be paid. Our suggestion is that, on production of properly vouched losses, quantum be addressed at mediation.

“These negotiations would be on the basis of no admission of liability.”

Mr Green, 67, was unveiled as the new man behind the Glasgow side in June 2012; however, he stepped down the following year.

In 2015 he and five others were charged with serious organised crime offences in relation to the acquisition of the club.

Mr Green also faced charges of conspiracy, fraud and an offence under Section 190 of the Companies Act 2006.

David Whitehouse and Paul Clark, who were appointed joint administrators of Rangers in February 2012, were among those to have their charges dropped.

Responding to the letter on Tuesday, Mr Green said: “I understand the letter was received at approximately the same time as the two former administrators of Rangers, Messrs David Whitehouse and Paul Clark of Duff & Phelps, received theirs.

“I was relieved to hear that the Lord Advocate of Scotland admitted in court that Mr Clark and Mr Whitehouse had been the victims of malicious prosecution by the Crown.

Michael McLean, a partner at Jones Whyte, said: “The admission made by the Lord Advocate is without precedent.

“Our focus is now to quantify the significant losses suffered by Mr Green relating to what has been a damaging, traumatic and stressful life event for him.”

In relation to the case of Mr Whitehouse and Mr Clark, a spokesman for the Crown Office and Procurator Fiscal Service (COPFS) said: “This prosecution has been subject to extensive review including by independent counsel.

“In light of that review, the Crown accepts legal liability to these pursuers.

“COPFS has taken steps to prevent a similar situation arising in the future.

“At this stage, proceedings remain live, and it would not be appropriate to comment in further detail at this time.

“More information will be made available in due course to support appropriate public accountability.”