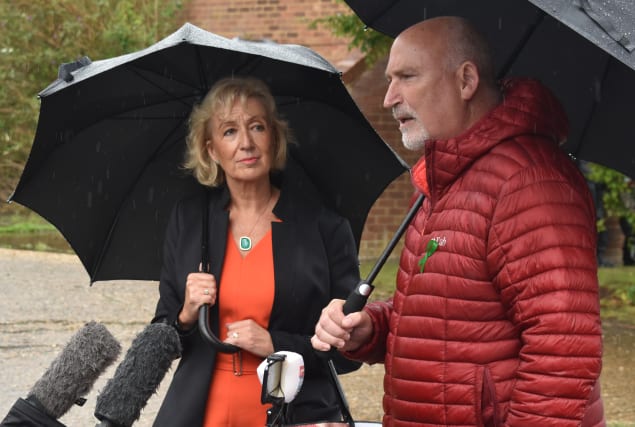 In a direct on-camera plea for the US President to personally intervene to help the teenage biker's relatives, Mrs Leadsom urged the billionaire businessman to think of his own family members.

Speaking to the media in Brackley, near the Northamptonshire air base where Harry was killed on August 27 last year, Mrs Leadsom said: "Today is an incredibly sad day for Harry's family and friends.

"I never had the pleasure of meeting him myself but over the last year, having met on a number of times with his family, I can see how very, very loved Harry Dunn was.

"This is such a difficult time for his family. Precisely because – not that anybody deliberately hurt him or set out to be careless or to drive carelessly – but that something terrible happened and the person who caused Harry's death has walked away with the help and support of the United States government.

"And that simply cannot be allowed to stand."

As dozens of bikers assembled nearby to pay their own tribute to Mr Dunn on the anniversary of his death, Mrs Leadsom issued a plea to President Trump to take a personal interest in the case.

Appealing for the president to ensure that suspect Anne Sacoolas – who returned to the US after claiming diplomatic immunity – faces a virtual trial, Mrs Leadsom pointed out that he has previously met with Mr Dunn's parents.

The MP told reporters: "He knows what they're going through – I know he is very sympathetic to their situation.

"So I want to make a real appeal to you Mr President – please give this family closure. Give them the virtual trial and the justice that they are demanding for their son Harry."

Family members were also present at the site, and spoke to Mrs Leadsom for several minutes before and after she made her plea to President Trump.

The US State Department issued a statement on Thursday in which it again offered its sincere condolences and sympathy to the Dunn family.

After pointing out that the United States government had declined the UK's extradition request, the statement said it would continue to engage with British counterparts to find a reasonable resolution.

Family spokesman Radd Seiger spoke after Mrs Leadsom, telling members of the media: "Today is the first anniversary of Harry Dunn's passing and it's been an incredibly painful year for the family.

"I guess today is just as painful as any other day and, like Andrea said, I admire this family – their courage and their fortitude in the face of the most appalling adversity."

Referring to the statement from authorities in the US which he said could signal the start of discussions between Washington and London, Mr Seiger added: "That's given the parents a real boost today.

"We are not getting carried away... but we are incredibly positive and optimistic today – more so than ever that there will be justice for Harry."