Why were all trains not stopped after fatal Aberdeenshire derailment, union asks 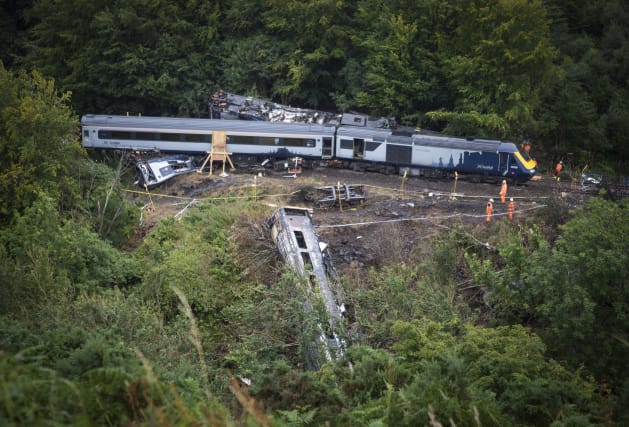 A trade union boss has questioned why rail services across the country were allowed to continue to run on the day of the train derailment which killed three people in Aberdeenshire.

TSSA general secretary Manuel Cortes has written to the Rail Accident and Investigation Branch (RAIB) to raise concerns relating to the incident involving the Aberdeen to Glasgow Queen Street service on August 12.

An initial report by RAIB said the train was stopped by a signaller at Carmont at 6.59am due to reports a landslip was obstructing the line, before reaching 72.8mph on the way to Stonehaven.

The train then “struck a landslip covering the down line and derailed” at around 9.38am, according to the report, with six other people injured in the incident.

In the letter, Mr Cortes says: “On the day of the accident at Carmont, weather conditions across much of the East Coast of Scotland were atrocious (as mentioned in the updated RAIB news story) with flooding in places like Stonehaven, numerous weather warnings and the cancellation of all train services running either way between Edinburgh and Fife, Glasgow or Dunblane.

“Aberdeen services were also mostly cancelled but one question has to be why all trains were not stopped? Why were certain services allowed to continue and not others?

“Further, we also understand that the rule book does not require speed restrictions to be in place in similar circumstances.

“Instead, this is down to Network Rail procedures but the company does not have a consistent national policy on managing weather events in terms of imposing precautionary speed restriction.

“What happens is that each route or region decides on its own policy which means that some (like the North West and Central Region (NW&C)) have a process whereby they have regular weather based meetings to determine if speed restrictions should be imposed as a precautionary measure even before an extreme weather situation is declared. Scotland does not have the same arrangement.

“Would you agree that it is entirely possible that had the NW&C process been in place then the train would have continued to run at caution and the accident may have been avoided or not been as bad?”

Mr Cortes also asked whether “the driver had a chance to apply the emergency brake” and “when obstructions on the line were reported”.

Police Scotland, British Transport Police and rail regulator the Office of Rail and Road are carrying out an investigation separate to the RAIB inquiry.

Passengers and staff at railway stations around the UK held a one-minute silence to remember the victims one week on from the derailment.

The Prince of Wales also thanked emergency responders for their bravery as he visited the site in the days following the incident.