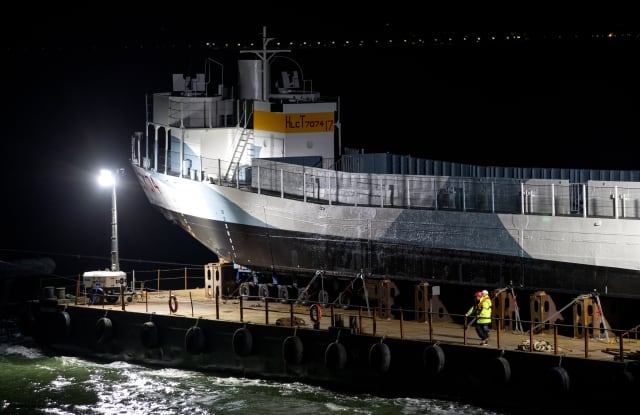 A bid to relocate the last surviving tank landing craft used at D-Day to its new home has been delayed due to high winds.

The 59m, 300-tonne LCT 7074 has been painstakingly restored at the Portsmouth Naval Base in a joint effort by the National Museum of the Royal Navy (NMRN) and Portsmouth City Council.

The £4.7 million project was funded by a National Lottery Heritage Fund grant.

The vessel was restored in the naval base’s ship fabrication hall in which the Royal Navy’s two new aircraft carriers were built.

She is due to grace Southsea Common in front of the D-Day Story museum, but an attempt to beach her on Saturday failed due to high winds.

The LCT 7074 was floated as far as the coastline of Southsea before the accompanying tug boats were forced to tow her back to the naval base.

The move had originally been planned for June, but was delayed due to the coronavirus pandemic, which added another £75,000 to the cost of the project.

Nick Hewitt, head of collections and research for the NMRN, said “We are hugely disappointed that we weren’t able to complete the move of this incredible ship as planned.

“We are restricted to very small windows of opportunity when the tides are right, but we also rely on calm winds and sadly we are experiencing unseasonably high wind speeds.

“We really hoped that the predicted reduction in wind would give us good enough conditions to land her, but it simply wasn’t safe to do so.

“We will now be reviewing the weather and trying again over the next 48 hours.”

Those involved will not be announcing the exact timing of the next attempt over fears crowds could gather to watch in breach of social distancing rules.

Andrew Neil: I’m not out to seek revenge on the BBC

Brexit briefing: 94 days until the end of the transition period