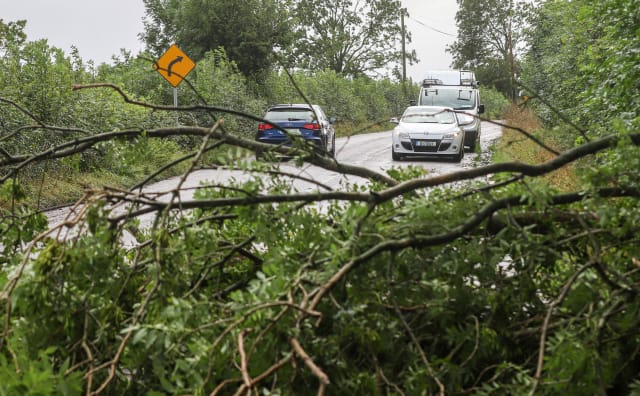 Gusts of up to 70mph could hit coastal areas as Storm Ellen moves on and leaves more wet and windy weather in its wake.

Almost 194,000 homes and businesses in Ireland were hit by power cuts and roads were blocked with fallen trees after the storm swept across the country, with Britain escaping the worst of it.

The Met Office said Ellen has cleared away from the north-west of the UK and Ireland after bringing severe gales to Ireland overnight.

Gusts of more than 60mph were recorded in Fermanagh and Magilligan in Northern Ireland in the early hours of Thursday morning, Met Office forecaster Bonnie Diamond said.

Although Storm Ellen has moved on, another low pressure system forming to the west of Ireland will result in more windy weather over the next few days, particularly in Northern Ireland and western parts of the UK.

The Met Office has issued a yellow warning for wind in these areas which is in place until 4am on Friday.

Ms Diamond said strong winds will develop through the Irish Sea that will bring squally gusts to parts of Northern Ireland, western parts of Scotland, western Wales and south-west England.

She said there could be gusts of 50-60mph along coastal areas and 40-50mph inland, with a chance of 70mph winds along the western coast of Wales.

“Along with those winds we are going to see some squally showers developing, again along western parts,” she said.

Ms Diamond said a large part of eastern Scotland, eastern England and southern England will see a sunny warm day on Thursday with highs of 26C in London.

“If you’re there you will be wondering what all the fuss is about,” she said, adding: “The impact from Storm Ellen was always going to be across mainly Northern Ireland and some western coasts, with much of the UK getting away with not seeing any severe weather.”

Another yellow warning for wind is in place for England, Wales, parts of Northern Ireland and parts of Scotland from 4am until 6pm on Friday.