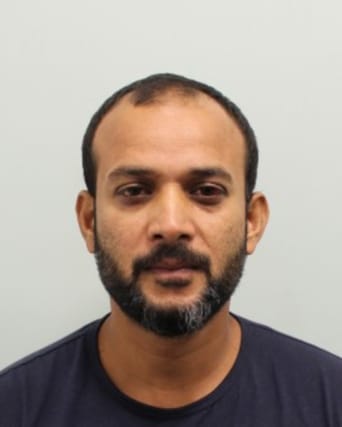 A murderer and serial stranger rapist dubbed the "E17 night stalker" has been jailed for life with a minimum term of 37 years.

Aman Vyas, 35, was sentenced on Thursday for six counts of rape of four women, grievous bodily harm and the 2009 murder of 35-year-old Michelle Samaraweera, after a trial at Croydon Crown Court.

Prosecutor Tom Little QC called Vyas "the E17 night stalker" as he told jurors the attacker turned a small area near his home in Walthamstow, east London, into his "hunting ground" for a "series of violent rapes" between March and May 2009.

He fled the UK two days after a Crimewatch appeal featuring an e-fit picture, and was arrested in India in 2011 after his former boss gave police a water bottle Vyas's brother had drunk from, which showed partial DNA linked to the crimes was a male sibling.

Detectives said Vyas last year became only the third person, and the second Indian national, to be extradited from India to the UK, following an eight-year court battle involving around 30 hearings.

Ms Samaraweera's sister, Ann Chandradasa, 48, said: "I actually really thought that he was literally going to get away with murder because of the amount of time he was in India and the amount of hearings.

"I'm just glad we have finally got justice for Michelle and I'm glad that the other victims have got justice as well.

"It's partial closure. Him being in prison doesn't take away the pain of what's happened and what all these women have been through."

Ms Samaraweera was attacked shortly after visiting a supermarket at around 1am on May 30 2009.

Vyas was 24 when he raped and strangled her in a children's playground, where her body was discovered by a dog walker shortly after 5.15am.

He was also convicted of raping three other women aged between 35 and 59 in March and April 2009.

Sentencing him to life with a minimum sentence of 37 years, Mr Justice Bryan told Vyas: "In the spring of 2009, there was a stranger rapist prowling the streets of Walthamstow looking for his prey. You were that rapist."

The judge said Vyas stalked Ms Samaraweera before killing her by asphyxiation, although the exact method is not known.

"You were willing to kill in pursuit of your sexual perversions and in Michelle you found a victim who fought back," he said.

"She had to be silenced and silenced she was."

Vyas, who has two children aged nine and five, evaded justice for more than a decade, leaving Britain weeks after his attack on Ms Samaraweera.

But after a 2010 police appeal, which saw police send more than 60,000 leaflets including CCTV images of the suspect, Vyas's former employer contacted authorities.

Vyas had already fled to India but was arrested and finally extradited in October 2019.

Detective Sergeant Shaleena Sheikh said: "Vyas carried out horrific and violent attacks on four women which, tragically, culminated in the murder of Michelle Samaraweera. He then did all he could to evade responsibility for his crimes and fled to India.

"He added further distress to those he hurt by subjecting them to a trial. I would like to commend the dignity and bravery shown by his victims and their families throughout this process, which has lasted over 10 years.

"Despite having DNA from the scenes of the crimes, Vyas was not on the database and this prompted a lengthy and complex investigation, which saw more than 1,100 DNA swabs taken and 1,815 addresses visited. We also issued more than 60,500 posters displaying an image of the suspect.

"The scale of this investigation has been remarkable and the case has lasted a decade, taking our inquiries to many different countries and resulting in a lengthy extradition process."

Vyas has already served just over two years on remand in India and the UK and will be eligible for release after 34 years, although the judge said he may never be freed.