Stations fall silent a week on from Stonehaven rail tragedy 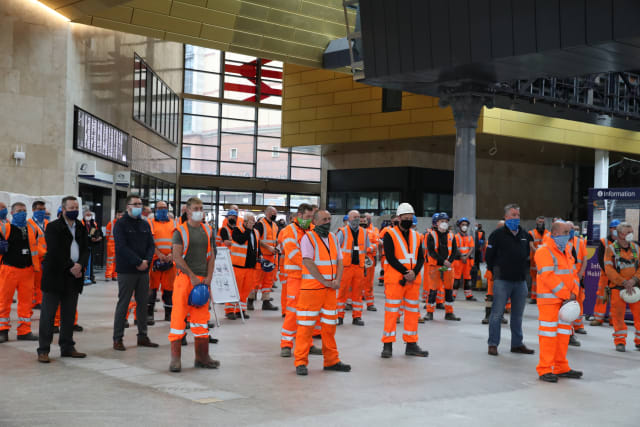 Passengers and staff at railway stations around the UK have held a one-minute silence to remember the victims of last week’s Stonehaven train crash.

Driver Brett McCullough, 45, conductor Donald Dinnie, 58, and passenger Christopher Stuchbury, 62, died when the 6.38am Aberdeen to Glasgow Queen Street train crashed into a landslide across the tracks on Wednesday August 12.

Six other people were injured.

Stations fell silent at 9.43am on Wednesday, exactly one week after the derailment was reported.

Many English and Welsh stations joined the tribute and the Scottish Parliament also marked the minute’s silence.

Ahead of the event, Ms Sturgeon tweeted: “I will join @ScotRail and others in Waverley Railway Station at 09.43 this morning, to remember those who lost their lives in the Stonehaven tragedy one week ago.

“We will remember Brett, Donald and Christopher and hold their loved ones in our thoughts.”

Investigators have said the train derailed and slid approximately 90 metres before hitting and destroying a barrier on the edge of a bridge, leading the front power car and one carriage to fall down an embankment.

ScotRail managing director Alex Hynes said: “Our hearts remain broken and will do for a long time.

“We hope that by coming together as a railway family, along with the local community and people across the country, we can support one another through this horrendous time.”

Fire crew members and Fire Brigades Union (FBU) officials laid three bouquets of flowers at Aberdeen station on Tuesday as a mark of respect to the victims.

Four firefighters were injured when they were struck by an apparently uncontrolled vehicle while responding to the incident.