Which other members of Johnson’s Government have fought to stay in post? 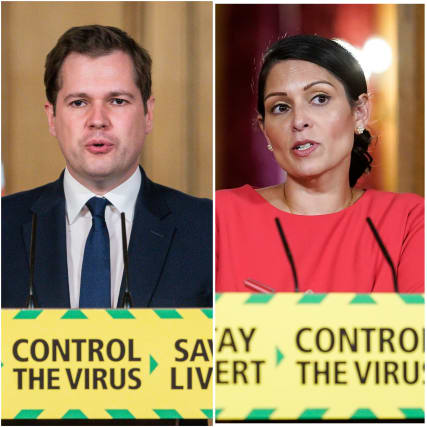 Education Secretary Gavin Williamson is facing calls to resign over the A-level and GCSE results row, but it is only the latest controversy to hit members of Boris Johnson’s Government.

Since Mr Johnson became Prime Minister just over a year ago in July 2019, numerous controversies have surrounded members of his top team. However, all have stayed in post.

The use of an algorithm to grade pupils whose exams had been cancelled due to coronavirus was called “unfair” as it penalised disadvantaged students, and Mr Williamson did a U-turn on Monday and allowed pupils to be marked according to teachers’ predictions.

The minister said he was “incredibly sorry for the distress” caused, but Tory former minister George Freeman said the “exam shambles” raised “worrying” questions about leadership at the Department for Education.

Fellow Tory ex-minister Sir Nicholas Soames tweeted on Monday: “What could have been in the Prime Minister’s mind that led him to appoint so mere, so unreliable, so wholly unsuitable a man to one of the most important jobs in Government? A catastrophic misjudgement, Williamson must go.”

Liberal Democrat leadership hopeful Layla Moran said: “There must be consequences for this catastrophic failure of governance. Gavin Williamson must resign, and if he refuses to go Boris Johnson must sack him.”

On Tuesday, Mr Williamson refused to answer questions on his position.

In February, Home Secretary Priti Patel’s future seemed in doubt after the most senior civil servant in her department resigned in a row over her alleged bullying of staff.

In a move described as “unprecedented” by a former head of the home civil service, former permanent secretary at the Home Office Sir Philip Rutnam accused Ms Patel of orchestrating a “vicious” campaign against him and of “shouting and swearing, belittling people, making unreasonable and repeated demands”.

As Mr Johnson was forced to launch an investigation into the resignation, then shadow home secretary Diane Abbott called for Ms Patel to step down while the Cabinet Office inquiry was conducted.

“You cannot have a minister who is in breach of the ministerial code and she should step down now,” Ms Abbott said.

The report on Ms Patel’s behaviour towards staff has not yet been published.

Housing Secretary Robert Jenrick more recently batted off resignation calls after he ensured a controversial housing development was agreed before a new levy was introduced which would have cost millions for its backer.

Documents released after pressure from Labour showed multimillionaire Conservative Party donor Richard Desmond urged Mr Jenrick to approve his Westferry Printworks development in east London before a new community infrastructure levy was introduced which, it is believed, would have saved Mr Desmond £50 million.

Mr Jenrick also faced accusations of “cash for favours” after it emerged that Mr Desmond had given the Conservatives £12,000 two weeks after the scheme for 1,500 homes was approved and that the Housing Secretary had sat next to him and viewed a video at a fundraising event.

Tim Farrom, Liberal Democrat spokesman for Communities, Housing and Local Government, called on Mr Jenrick to quit over the controversy, telling the PA news agency: “Given the minister has accepted that his decision to sign off the project was unlawful, he should also accept that he is unfit to continue to serve in that role and resign immediately.”

Despite Mr Jenrick telling MPs he was “not blind to the fact that things could and should have been done differently”, Mr Johnson has continued to back him, and the head of the civil service, Sir Mark Sedwill, said the Prime Minister “considered the matter closed”.

In May, Mr Johnson also faced pressure from his own Tory backbenchers and members of the public to sack Dominic Cummings after it emerged his senior aide had made several trips during lockdown.

Mr Cummings travelled 260 miles to County Durham in March to self-isolate with his family – while official guidelines warned against long-distance journeys – because he feared he and his wife were sick and would be unable to care for their son.

More than 40 Conservative MPs called for Mr Cummings to go, with Scotland minister and newly elected leader of the Scottish Tories Douglas Ross resigning from the Cabinet in protest, but Mr Johnson maintained that his adviser had done nothing wrong.

Those calling for Mr Cummings’ departure included former Northern Ireland secretary Karen Bradley, who said he must “stop damaging the work that needs to be done”, and former minister Jeremy Wright, who added: “This is more important than the position of any individual in Downing Street.”