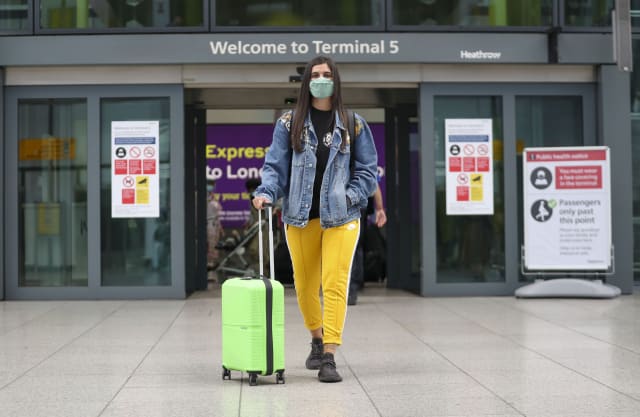 Heathrow Airport has announced the development of a new coronavirus testing facility which it hopes will lead to the end of the mandatory 14-day quarantine for those returning from certain countries and “protect the economy”.

Arriving passengers will be able to book swab tests and have results sent to them in seven hours under the proposal, which is being used in Germany and Iceland.

Travellers can do a second test at home a few days later and then leave quarantine early if they pass both checks, the Daily Mail reported.

Heathrow executives hope those testing negative could leave quarantine five to eight days after landing, though the airport’s programme needs Government approval before it can begin.

It comes as The Daily Telegraph reported Cabinet ministers will meet next week to discuss plans to replace blanket quarantines with Covid-19 testing for travellers.

Documents released on Friday from Sage’s June 18 meeting showed the scientific group found “double testing of travellers significantly reduces the risk of false negatives and could enable quarantine duration of less than 14 days”.

Heathrow chief executive John Holland-Kaye wrote in the Mail the airport had been calling on the Government to introduce testing as an alternative to quarantine for months.

He said: “Heathrow is ready to support this provided the Government sets clear guidelines for a second test and changes regulations to allow passengers who provide two negative tests to leave quarantine early.

“We have worked closely with aviation services company Collinson and logistics firm Swissport to ensure such a testing procedure can be in place. If the Government is serious about protecting the economy, this is exactly what should be done.”

Mr Holland-Kaye said double-testing “could have been in place for those caught up in the French problems last weekend”.

“It is not too late to save people returning from Greece, Croatia or Italy the inconvenience of 14 days at home,” he added.

The executive previously declared the UK “needs a passenger testing regime and fast”, promising on July 29 that his airport would be “ready to go in two weeks” if the Government allowed tests to be used to ease restrictions.

At the time, Labour leader Sir Keir Starmer said arrivals from high-risk countries should be tested twice for coronavirus over a number of days to potentially reduce their quarantine period.

Meanwhile, a study suggested quick and effective testing and tracing of Covid-19 could reduce the reproduction number (R number) by up to 26%.

But Imperial College London researchers warn that testing alone is unlikely to bring the R number below one at current levels of immunity.

Therefore other interventions such as continuing physical distancing will be needed, they said.

Preliminary modelling from the London School of Hygiene and Tropical Medicine suggested 94% of coronavirus cases would be detected if the quarantine period was cut to eight days and passengers tested negative on the seventh.

Shorter quarantine periods “can prevent a substantial amount of transmission”, the research indicated.

Some 88% of cases would be identified if travellers self-isolate for six days and test negative on the fifth day, according to the study published in the Lancet.