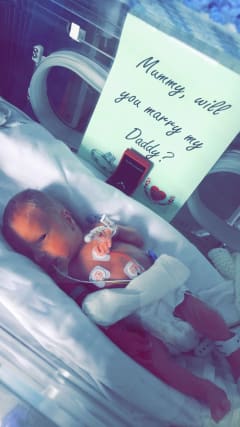 A mother who gave birth prematurely during lockdown has celebrated getting engaged after her newborn son helped her partner propose.

John Sellors, 29, put an engagement ring and a note inside his son Cobie’s incubator two days after he was born.

Sian Stafford, Mr Sellors’ partner, said she “didn’t even notice the note or the ring at first”, describing the proposal as a “surreal but happy moment”.

The note from Mr Sellors asked Miss Stafford if “mummy would marry daddy”.

Mr Sellors, who has been with his fiancee for eight years, said: “I’m not usually the romantic type, but I really wanted to do something to lift Sian’s spirits and she had been dropping hints for a while about wanting to get married.

“The nurses were great and really helped make it a special proposal to remember.

“They just told me to take Sian for a coffee and that they would sort it out for when we got back.

“When we got back the message and ring were there and it was such a lovely moment, I can’t thank them enough.”

Miss Stafford, 26, added: “I was so shocked, I really didn’t expect it and I was really overwhelmed.

“When we got back on to the unit, the nurses told me that Cobie had been taken off his CPAP breathing machine and so I needed to go and look, as I would be able to see his face more.

“I was concentrating so much on Cobie that I didn’t even notice the note and the ring at first.

“But then John said, ‘look, I think Cobie wants to know something!’ Then I read the note and it was such a surreal but happy moment.”

The couple hope to bring him home in the next few weeks.

Talking about the birth and her time in hospital, Miss Stafford, from Pinxton, Derbyshire, said: “It’s been a bit of a whirlwind as Cobie arrived so early, we had to call an ambulance and I didn’t really believe I was in labour until I was on the birthing unit with John and they were saying I was going to have Cobie that day.

“The midwives, nurses and all the staff have been amazing and so supportive. It’s really difficult at the moment, as I feel that I’m having to split myself in two to see my daughter Ruby, whilst also seeing Cobie on the unit, as she can’t come in to see him due to the Covid-19 restrictions, but it will all be worth it in the end.”

Lynsey Lord, deputy sister on the neonatal ward, who helped to plan the surprise proposal, said: “It was such a special moment to be part of.

“It’s not often we get the chance to be involved in a proposal on the unit and this was certainly a first for me, but it was so lovely to see the family all so happy, especially during what has been such a difficult time for everyone.

“It was so nice to help celebrate such happy news.”

Asked if they had made any wedding plans, Miss Stafford said: “We are currently concentrating on getting Cobie home, but yes we will hopefully start planning once things have settled down for us.”