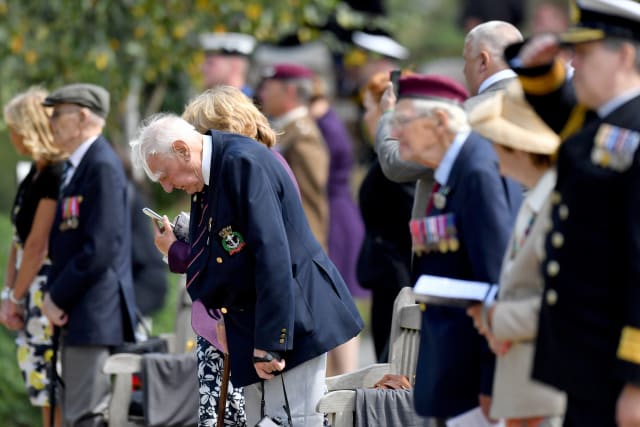 Veterans shared their memories of the Second World War as the Duke of Cambridge paid tribute to those who fought in the Far East on VJ Day.

The 75th anniversary of VJ Day – victory over Imperial Japan which signalled the very end of the Second World War – was commemorated with a series of events on Saturday.

In a speech on BBC One’s VJ Day 75: The Nation’s Tribute, William spoke of how his great-grandfather King George VI addressed the nation on August 15 1945, as “the most catastrophic conflict in mankind’s history came to an end”.

In his speech on Saturday, William said: “It is hard for us to imagine what Victory over Japan Day must have felt like at the time; a mix of happiness, jubilation and sheer relief, together with a deep sadness and overwhelming sense of loss for those who would never return home.”

Earlier on Saturday, a televised remembrance service took place at the National Memorial Arboretum in Alrewas, Staffordshire, where a two-minute silence was led by the Prince of Wales and Duchess of Cornwall at 11am.

Prime Minister Boris Johnson read the Exhortation before the silence, which was followed by the Battle of Britain Memorial Flight flypast over the arboretum.

About 40 veterans attended the ceremony of remembrance, sharing their stories with one another and with Charles and Camilla.

Edward Woodward, 97, who served in Burma, India and Malaya with the Royal Corps of Signals, caused mirth after asking the royal couple to guess what was the most sought-after item in their air-dropped rations.

“Toilet paper,” he told them.

After meeting the couple, the former electrician from Kings Norton, Birmingham, said: “That had them laughing.”

Charles and Camilla laid poppy posies and wreaths at the Kwai Railway Memorial, while veterans looked on from benches dotted around the memorial, to maintain social distancing.

In a speech dedicated to the hundreds of thousands of Allied and Commonwealth personnel who fought and died in the campaign, Charles said: “All too often those who served in the Far East have been labelled The Forgotten Army, in a forgotten war.

“We salute all those who remain among us and offer our most heartfelt and undying gratitude to all those that have gone before.

“Your service and your sacrifice will echo through the ages.”

The Covid-19 pandemic has meant tributes to mark the landmark anniversary have been organised online and on television, including a video published online of the Prince of Wales reading an extract from the diary of his grandfather, King George VI, written on August 15 1945.

He reads: “By 10am there were already large crowds outside Buckingham Palace and we drove in procession in a state landau with an escort to Westminster where I opened the first peacetime Parliament since 1938.

“The crown was carried in the full procession but no robes were worn. My speech took 16 minutes to read, in which I mentioned the surrender of Japan.”

In a separate video, the Duke of Gloucester reads an extract from the speech delivered by King George VI on VJ Day, which formed part of an online service of commemoration from Leicester Cathedral.

In a special message, the Queen and Duke of Edinburgh – who himself was aboard HMS Whelp in Tokyo Bay as the Japanese signed the surrender aboard USS Missouri on August 15, 1945 – gave “grateful thanks” to all those who fought for the Allied nations.

In a statement, the Queen said: “Prince Philip and I join many around the world in sending our grateful thanks to the men and women from across the Commonwealth, and Allied nations, who fought so valiantly to secure the freedoms we cherish today.”

The Duke of Edinburgh, 99, featured alongside other veterans on a number of large screens across the UK, including the Piccadilly Curve, in a photo-montage showing veterans today and when they served.

The RAF’s Red Arrows had planned a UK-wide tour with flypasts over the four nation’s capital cities throughout Saturday.

However, the flypasts over London, Edinburgh and Cardiff were cancelled due to poor weather, the Ministry of Defence said.

Small poignant ceremonies took place across London to begin the day, including a piper playing Battle’s Over at the Imperial War Museum’s HMS Belfast in London at sunrise, as part of a tribute entitled Waking Up To Peace.

Defence Secretary Ben Wallace was joined by military chiefs as he laid a wreath at the Cenotaph, Whitehall, London.

In a letter addressed to the veterans of the Far East Campaign, Mr Johnson showed his gratitude to the 50,000 British and Commonwealth service personnel who laid down their lives in the war against Japan, half of whom died in prison camps.

He writes: “You were the last to come home but your achievements are written in the lights of the glittering capitals of the dynamic region we see today.”

He joined nine other global figures including US president Donald Trump, Nigeria’s president Muhammadu Buhari and Canada’s prime minister Justin Trudeau in a video message thanking those who served.

In the Friendship of Nations video released ahead of commemorations, each leader said in turn: “To all who served, we thank you.”

In a video message, Labour Leader Sir Keir Starmer said: “On behalf of the Labour Party I want to pay tribute to the wartime generation, who through the horrors of conflict showed us the spirit and determination that we need to always remember and always be grateful for.

“It’s important that as we face the challenges of today, we take inspiration from that generation.

“Through their community spirit and their bravery and their determination for a better world they’ve shown us what we can achieve when we pull together.”