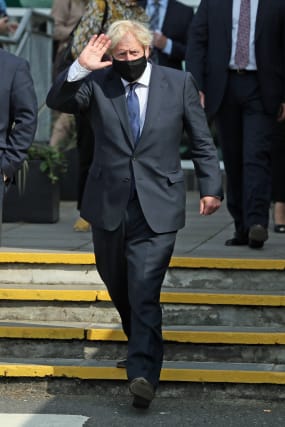 Boris Johnson has said there will be a trade border down the Irish Sea “over my dead body” following Brexit.

During a visit to Northern Ireland, the Prime Minister reiterated his promise that businesses in the region would enjoy unfettered access to markets in England, Scotland and Wales.

He has also agreed to “intensify” partnership arrangements with the Republic of Ireland and said more work could be done on bilateral deals.

“There will be no border down the Irish Sea – over my dead body.”

He said it was important to have the Northern Ireland protocol, which ensures the region follows some of the EU’s rules to allow freedom of movement of goods and services across the Irish border.

The next round of Brexit talks will begin on August 18 between the Prime Minister’s adviser David Frost and the European Union’s Michel Barnier in Brussels.

In a tweet, Mr Frost, who was not at the meeting in Northern Ireland, said: “We go in good faith to talk constructively about all the issues. Our assessment is that agreement can be reached in September and we will work to achieve this if we can.”

Under the protocol, if no wider trade deal is secured with the EU, tariffs would be paid on goods travelling from Great Britain into the Republic of Ireland and the rest of the EU via Northern Ireland.

Which goods are at risk of doing so has still to be decided in negotiations with Brussels, with the EU keen to ensure Northern Ireland does not become a backdoor entry point to its single market.

The port of Larne in Co Antrim is preparing to install a border control post and the UK has announced extra funding for borders with the EU.

The Prime Minister outlined hopes for greater co-operation with Ireland now that Britain had left the EU.

Mr Martin said both sides knew that they needed to avoid another economic shock following Covid-19.

“It seems to me that there is a landing zone if that will is there on both sides and I think it is, on the European Union side and on the British side to find that landing zone.

“My own gut instinct is we both understand that we don’t need another shock to the economic system that a no-deal Brexit would give or a sub-optimal trade agreement would give to our respective economies across Europe, Ireland and of course within Great Britain itself alongside the enormous shock that Covid has already given.”