Internal structure of ancient eye ‘comparable to that of modern bees’ 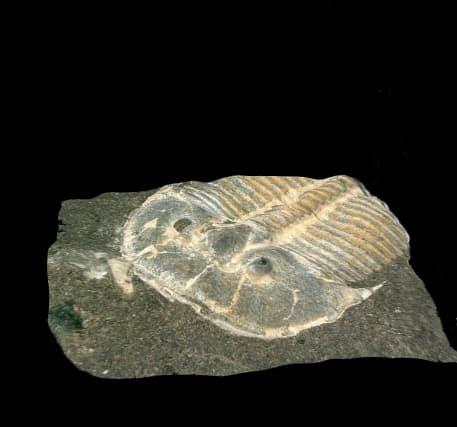 The internal structure of a 429-million-year-old fossilised trilobite eye is almost identical to that of modern bees, researchers say.

The principles of vision in many insects and crustaceans today are at least half a billion years old, the findings suggest.

Researchers used digital microscopy to re-examine a fossilised trilobite – Aulacopleura koninckii – that was discovered in 1846 near Lodenice, Czech Republic.

Trilobites are a group of extinct marine arthropods – invertebrate animals having an exoskeleton, a segmented body, and paired jointed appendages.

The fossil is 1–2 millimetres high, with two protruding semi-oval eyes on the back of its head, one of which has broken off.

They found a number of internal structures that are similar to those of the compound eyes of many modern insects and crustaceans.

They include their visual units known as ommatidia (measuring 35 micrometres in diameter) that contain light-detecting cells grouped around a transparent tube called a rhabdom.

The researchers suggest that a dark ring surrounding each individual visual unit is made from pigment cells that acted as barriers between them.

Each visual unit is topped with a thick lens and the remains of what the authors suggest is a flat crystalline cone that light passed through before being focused on to the rhabdom.

They say that the small size of its visual units indicates that A. koninckii lived in bright, shallow waters and was probably active during the day, as smaller diameter lenses are efficient at capturing light under bright conditions.

And the presence of pigment cell barriers between visual units suggests the trilobite had mosaic vision, with each visual unit contributing a small portion of the overall image, similar to the compound eyes of many modern insects and crustaceans, they said.

The authors write: “We show that this Palaeozoic trilobite in principle was equipped with a fully modern type of visual system, a compound eye comparable to that of living bees, dragonflies and many diurnal crustaceans.

“It is an example of excellent preservation, and we hope that this manuscript will be a starting point for more research work on fossil evidence, and to develop a deeper understanding of the evolution of vision.”