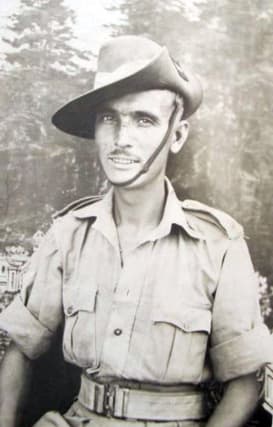 The daughter of a Second World War soldier has shared his heart-breaking final letter to her after finding it almost 60 years after it was written.

Lance Corporal James Ambrose died a prisoner of war in Rangoon Jail in Burma (now Myanmar) after being captured by occupying Japanese forces on November 8 1943.

Aged 29, the Liverpudlian, who served in the King's Regiment, had been operating behind enemy lines as part of an elite Commonwealth force known as the Chindits.

Prior to leaving on what would become his final mission, Mr Ambrose penned a letter to his then 19-month-old daughter Valerie Gornell and her mother while stationed in India.

But for almost 60 years, the letter – along with a birthday card he sent – remained hidden away from Mrs Gornell until her mother Lucy, finally shared it with her shortly before her death, aged 85.

Mr Ambrose had addressed the birthday card, "To my daughter, one of the two things worth fighting for", and wrote about missing her greatly.

"How nice it will be when we get to know each other properly," he wrote.

"But cheer up my dear, the day is not far off when your mummy will say: 'Daddy is coming home today'.

"Till then my dear, may God watch over you and your mother."

Mrs Gornell, 79, from Cumbria, has now shared her late father's letter ahead of the upcoming 75th anniversary of VJ Day – the day Japan surrendered to Allied forces on August 15 1945, bringing an end to the Second World War's hostilities.

The letter was among the many tributes which have been posted on the Commonwealth War Graves Commission's (CWGC) newly created online Wall of Remembrance ahead of Saturday's anniversary event.

Speaking about how she found the letter, Mrs Gornell said: "It wasn't until after the war was over that my mother was informed of his death.

"She was so distraught and never remarried. I learnt from an early age never to mention the war.

"And then suddenly, almost 60 years later, mum handed me a box in which she'd kept a birthday card my father had sent from India and his last letter."

In 2003, Mrs Gornell managed to visit her father's grave in CWGC Rangoon War Cemetery, the final resting place of 1,381 Commonwealth servicemen of the Second World War.

She said: "It was wonderful to finally visit his grave and see how beautiful the cemetery is.

"This year being able to leave a tribute on the commission's Wall of Remembrance means the world. Just a reminder that my family will never forget dad or his comrades."