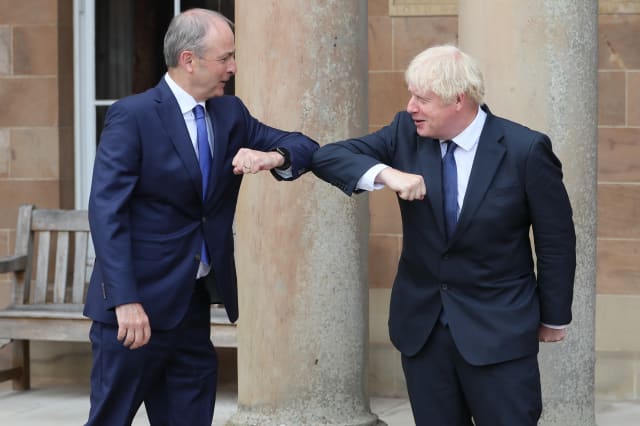 The Prime Minister has promised to develop Britain’s relationship with Ireland after meeting the new Taoiseach.

Boris Johnson greeted Micheal Martin with an elbow bump outside Hillsborough Castle in Co Down.

It was Mr Johnson’s first visit to Northern Ireland since Stormont powersharing was restored in January, and his first face-to-face meeting with his Irish opposite number since a new Government was formed in Dublin.

Mr Johnson said: “I had the honour of meeting the Taoiseach several years ago. I am very pleased to develop our friendship and relationship now.”

It was his first visit since the coronavirus pandemic struck and there have been calls for closer collaboration between Ireland and Britain to tackle the threat.

Mr Johnson added: “It’s great to see you Taoiseach, it’s great to be here in Northern Ireland, and we look forward to developing our relationship in all sorts of ways – east-west, north-south, you name it.”

“It is important for us both in terms of the British-Irish relationship which has been the cornerstone of much progress on the island of Ireland and between our two countries for well over two to three decades, and we want to maintain that,” he said.

“It is challenging times ahead with Covid, Brexit, all of that.”

The Fianna Fail leader said it was particularly fitting the engagement was taking place so soon after the death of former SDLP leader John Hume.

“We remember John at moments like this because he did so much to facilitate these kind of meetings and make them much more regular in the normal course of events,” he said.

Shortly after arriving at the castle, the Taoiseach joined the Prime Minister for a walk in the restored grounds of the royal residence and tourist attraction in an affluent village near Belfast.

The Prime Minister outlined the first stage of plans to mark the centenary of Northern Ireland’s foundation.

Northern Ireland was created in May 1921 following the partition of Ireland.

A forum and historical advisory panel will work alongside the Government to commemorate the anniversary.

Arriving at Hillsborough Castle, Mr Johnson was greeted by Northern Ireland Secretary Brandon Lewis before exchanging pleasantries with the first and deputy first ministers in the gardens.

Ms O’Neill inquired after the Prime Minister’s baby son, to which he responded that Wilfred is “starting to verbalise and make noises”.

Asked by Mr Lewis how he was sleeping, Mr Johnson replied it was “not an issue”, adding that the baby “goes out like a light”.

The Northern Ireland Executive will receive £2.2 billion additional funding this year for its Covid-19 response.

The Treasury has also protected more than 316,000 jobs and granted thousands of business loans.

Mr Lewis said the centenary year would promote the region on a world stage.

“I am delighted that the Prime Minister is in Northern Ireland today, and has announced the first stage of our plans to mark this centenary,” he said.

“This is a fantastic opportunity for people right across the UK to celebrate Northern Ireland and its integral place within our Union.

“We will use the centenary next year to promote it on the world stage, celebrating its people, culture, traditions and enterprise and its vital contribution to the United Kingdom.”