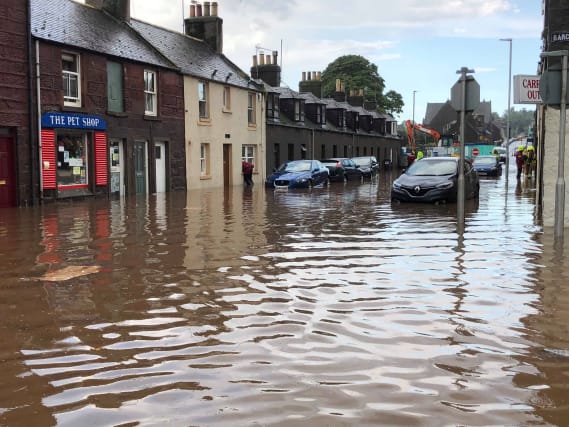 Weather warnings remain in place for much of the UK after thunderstorms continued to cause disruption amid scorching temperatures.

Yellow thunderstorm warnings have been issued for much of England, Wales, parts of Northern Ireland and southwest Scotland, with the potential for lightning, heavy rainfall and hail on Thursday.

It comes after temperatures above 34C were recorded for the sixth day in a row in parts of southern England, for the first time since at least 1961.

Temperatures could remain above 20C (68F) overnight into Thursday, according to the Met Office, while further unsettled weather is expected throughout the afternoon and evening.

Forecaster Greg Dewhurst said: “It’s not often we get temperatures this high over several days, and that is triggering thunderstorms across parts of England and Wales.”

The yellow thunderstorm warning for Wales and most of England – excluding the north east – is in place all day on Thursday, when sunny spells could see maximum temperatures of up to 32C (90F) in the south east.

Northern Ireland and southwest Scotland may experience power cuts and flooding during thundery showers in the morning, with the weather warning due to lift before midday.

Thames Water said that ongoing power supply issues in Guildford meant it was using tankers to bring water into the area, as it urged customers to use water for essential purposes only in the coming days.

Essex and Suffolk Water said that due to “record water demand” it was working to maintain supplies but users could notice lower than normal pressure.

An amber thunderstorm warning for most of Wales, the West Midlands and parts of the North West was issued by the Met Office on Wednesday evening after severe thunderstorms causing flooding and disruption.

Gloucestershire Fire & Rescue Service said it was experiencing “high call volumes” due to bad weather and had been made aware of flash flooding in Gloucester.

“Whilst the bad weather continues, please be careful and only travel if absolutely necessary and with extreme caution,” it tweeted.

Elsewhere, Cheshire Police said on Twitter they were dealing with a number of weather-related incidents in the village of Tarporley, including fallen trees and flash flooding, and advised nearby residents to avoid all but essential travel.

Some 10 flood alerts covering areas in the West Midlands were issued by the Environment Agency on Wednesday evening, alongside three flood warnings – meaning immediate action is required.

Two of the warnings, which indicate flooding is expected, covered the River Trent, while third was issued for Sandyford Brook in Stafford.

Three people died in a train derailment in Aberdeenshire after a ScotRail service crashed on Wednesday amid heavy rain and flooding in Scotland.

British Transport Police (BTP) said those pronounced dead at the scene near Stonehaven included the train’s driver, while six people were injured in the derailment.