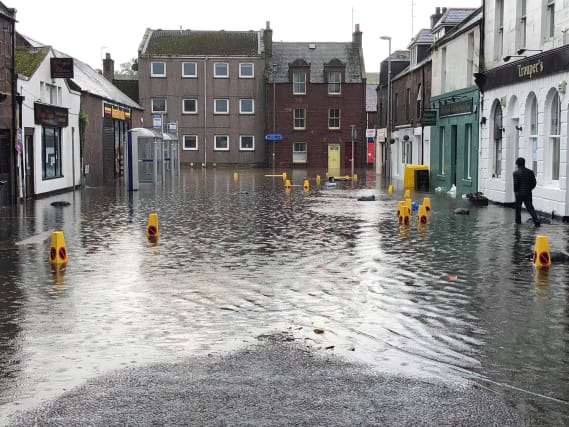 Sweltering temperatures and thunderstorms are set to continue after causing major disruption in parts of the UK this week.

A yellow storm warning has been issued for the whole of England, Wales and areas in Scotland by the Met Office, meaning those regions could see flooding and power cuts from Wednesday afternoon until the end of the week.

It comes after torrential rain and lightning lashed large parts of Scotland causing flooding and travel disruption on Tuesday evening.

Perth and Kinross, the Lothians, Forth Valley and the north east were among the most affected by overnight lightning strikes and heavy downpours.

The Scottish Fire and Rescue Service confirmed it was called to multiple reports of flooding in the Perthshire area, affecting many properties.

Vehicles were recovered from busy roads after they were abandoned and there were reports of internet services being disrupted.

Ten properties in Lancashire were also affected by flooding following overnight storms, according to the Environment Agency.

Similar conditions are expected to be seen in parts of Northern Ireland, England and Wales from Wednesday afternoon.

The Met Office has warned of potential damage to buildings from lightning strikes or strong winds and a chance of travel disruption due to flooding.

It also warns of 30 to 40mm of rain falling in less than an hour in some places.

But the heatwave in southern England is set to continue, with London and the south east expecting temperatures of up to 36C (96.8F) on Wednesday.

Police forces and the RNLI have warned about the dangers of entering water after the sweltering conditions led to a number of weather-related accidents across the country over the past week.

On Sunday, a mother died after going into the sea to save her youngest son who had got into difficulty in a kayak in Norfolk.

The woman, named locally as Danielle Chilvers, 37, of Swaffham, died after she got caught in a suspected riptide and was later pronounced dead in hospital.

Across Monday and Tuesday, the bodies of two friends were recovered from the sea off Brighton after a small, unoccupied dinghy was found.

And the RNLI said that lifeguards in Kent carried out an “unprecedented number” of rescues, with 24 people rescued in a single day at Ramsgate Main Beach, while volunteers with Oban RNLI in Argyll, Scotland, rescued nine people and a dog in one day.