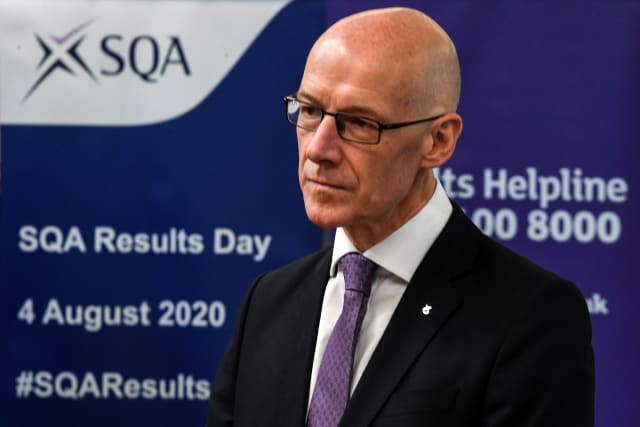 Scotland’s “perfectly fair model” of exam results was only changed because of the “anguish” coronavirus has caused rather than the disproportionate impact of moderation on poorer children, according to John Swinney.

The 124,564 results downgraded by the moderation system requested by the Scottish Government will revert to the marks estimated by teachers after a U-turn by the Education Secretary on Tuesday.

Despite ordering the moderated grades to be withdrawn, Mr Swinney insisted the process was fair and the Scottish Qualification Authority followed his instructions to “maintain standards from year to year”.

Before the U-turn, Mr Swinney and First Minister Nicola Sturgeon had argued the system would not be “credible” if they accepted teacher estimates.

But it was the “heartfelt pleas of young people” about Covid-19’s impact, rather than the disparity in moderation of results between schools in affluent and deprived areas, that caused Mr Swinney’s “change of mind”.

He said: “The approach that had been taken, which was a perfectly fair model the SQA had put in place, emphasised heavily the importance of maintaining standards from previous years to this year.”

“I concluded that we had not taken enough account of the trauma and the difficulty created by Covid-19 in the lives of those young people and accordingly I said that we should respect and apply the judgments made by individual teachers.”

Asked by Adam, a pupil at Monifieth High School in Angus, whether there were plans in place if exams are cancelled again in 2021, Mr Swinney said the Scottish Government has faced an “extreme situation very abruptly this year” but an SQA consultation and an inquiry by University of Stirling Professor Mark Priestley will “inform the contingency plan”.