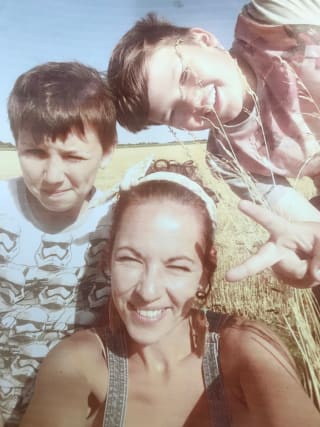 Tributes have been paid to a loving mother who died after she went into the sea to save her youngest son who had got into difficulty in a kayak.

Danielle Chilvers, 37, of Swaffham in Norfolk, was at the beach at Waxham in the county when the tragedy unfolded on Sunday.

The mother-of-two, whose eldest son is 17, went into the water to help her 14-year-old son and his friend, who were in a kayak.

But she got caught in a suspected riptide, and although rescuers brought her to shore she was pronounced dead in hospital.

The two boys managed to get to safety.

Her former partner Kevin Kazer, who is the father of her two sons, said: “The sea looks flat as a pancake and calm as anything, but a riptide has just taken her.

“None of us are going in the sea any more, that’s for sure.”

The 45-year-old printer said he had been separated from Ms Chilvers for 10 years but they “always got on really well” and their sons, who he asked not to be named, are now living with him.

“She was a wonderful person,” said Mr Kazer. “She liked flowers, she loved gardening, she had an allotment.”

He said she won the best beginner for 2019 award from the Swaffham Community Allotments and Leisure Gardens Association (SCALGA) and enjoyed being outdoors.

She had worked at Nicholas Hamond Academy, a secondary school and sixth form in Swaffham, in a safeguarding role for a number of years, Mr Kazer said.

He said she loved the sun and going camping, and had been back and forth from Swaffham to Waxham in recent weeks.

“They would go round the coast,” he said. “They’d found a little spot and it looked really nice.

“She loved going on trips to the coast with the boys.

“That was all rooted round them two, that’s for sure.”

He said she was “pretty fiery” and “would get things done”, adding: “She was just really loving, to be honest.

“She just loved life, all the good things.”

Ms Chilvers lived at a rented terraced house in Swaffham with her two sons and Mr Kazer has a separate address in the town, but has now moved in with the boys.

He said of their two sons: “They’re really upset but they’re in good spirits as we’ve got a lot of stuff to do.

“It’s a bit of a mountain to climb.

“She will be missed a lot, that’s for sure.”

Norfolk Police said the death is being treated as unexplained but not suspicious.

Superintendent Jason Broome, of Norfolk Police, said: “While inquiries are continuing to establish the exact circumstances leading up to the woman’s death, this is a tragic situation and our condolences are with her family.”