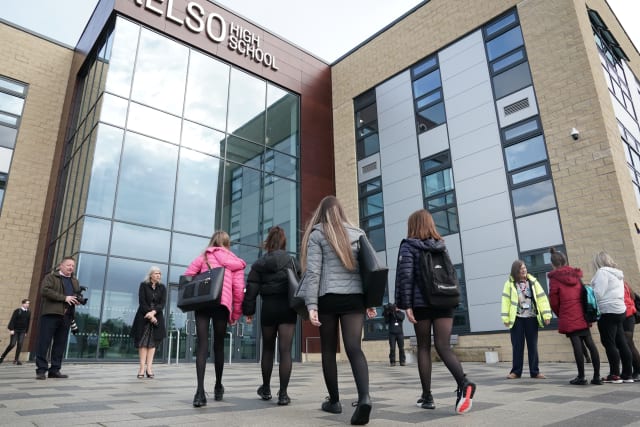 Pupils and parents have told of their mixed emotions as Scottish schools become the first in the UK to reopen as lockdown is eased.

Local authorities across Scotland are taking different approaches with the time frame for reopening for the first time since March 20.

Pupils in the Scottish Borders are returning on Tuesday, as are some in Shetland on a phased basis.

Alex Bisset, an S6 pupil at Kelso High School, in the Scottish Borders, told the PA news agency he felt safe returning as extra hygiene measures have been put in place on campus.

But he is pessimistic about how long the school will remain open.

The 17-year-old from Birgham said: “I’m feeling quite happy that things are slowly returning to normal but at the same time I don’t think it’s going to last.

“I feel like in not too long there’s going to be perhaps another outbreak and we’ll all be sent home again.”

Isla Findlay, an S5 pupil at the school, said she felt a little overwhelmed seeing so many of her classmates after five months of lockdown.

“It’s just, like, what’s going to be different? I’m happy to see all of my friends – just how are they going to handle everything? It’s a bit scary.

“I’m feeling safe, it’s just a lot seeing everyone again. I thought it would be a lot worse but it’s nice to see everyone as it’s been so long.”

Kelso High School head teacher Jill Lothian is optimistic about the return of pupils, saying she does not want the pandemic to “define them”.

But she acknowledged some parents are worried about the move.

She said: “They came in this morning, they were smiling, it was great to see them in school and I hope they’re glad to be back – it’s about learning.

“What I don’t want is for Covid to define them and I think that’s what’s really important is that we take this opportunity this year and move forward – and that’s what we’ll help them with.”

Parent council chairwoman Gemma O’Brien, who has a daughter at the school, said: “I’m nervous for the students, they’ve been cooped up for the last five months with their family and now the day has come where they’re just getting back into school with all of their old friends and new friends as well and all their teachers.

“It’s a massive step just to get here and I think a lot of them were not sure when it was going to come and if it was ever going to come this year.

“I’m a little bit apprehensive for everybody but I know this is what everybody is needing.”

Elsewhere in Scotland pupils will return from Wednesday, with many councils operating a phased return ahead of the August 18 deadline for all pupils to be back full-time.

Social distancing will be in place for adults and encouraged for older pupils, while young children will not be expected to.

Face masks will only have to be worn by staff who cannot effectively social distance, however anyone who wishes to should be allowed.

Fears have been raised about how well-prepared teachers are to deal with mitigating the spread of the virus, as well as anxiety among staff who are returning.

First Minister Nicola Sturgeon said such feelings are “entirely understandable” and stressed reopening schools is a priority for the Scottish Government.

Educational Institute of Scotland (EIS) general secretary Larry Flanagan said about 80% of its members had expressed “deep concerns” about safety over the reopening of schools.

He told BBC Good Morning Scotland: “One of the areas that is of particular concern is around the absence of physical distancing amongst young students, and that’s one of the areas where they think face coverings could be a mitigation that would make everyone safer in the school environment.

“Discussions are ongoing with the Scottish Government around improvements that could be made to the current safeguards which should be in place to try and make sure that schools are Covid secure.”