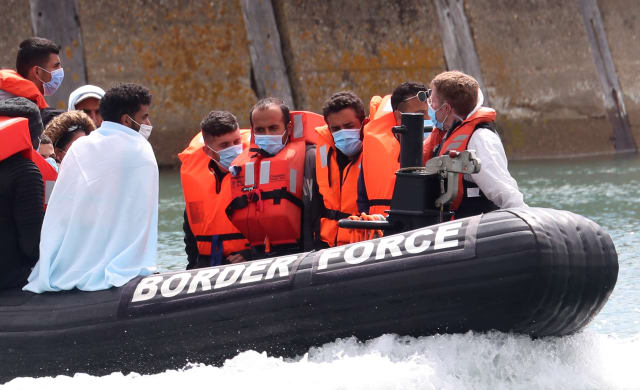 More than 4,000 migrants have now reached the UK in 2020 by crossing the English Channel in small boats.

Families with young children have been among hundreds of people arriving in Dover in the last few days as the political row over the crisis has intensified.

While South East England basked in roasting sunshine on Saturday, another 151 migrants arrived in the UK after crossing the dangerous Dover Strait.

The Home Office has officially asked the Royal Navy for help and a former Royal Marine has been appointed “clandestine Channel threat commander”.

Up to 12 people were seen being brought ashore in Dover earlier this morning aboard patrol boat Speedwell.

French authorities are also active in the English Channel today.

After a surge in crossings in the latter part of this week, the number of migrants who have reached the UK in 2020 in small boats is now more than 4,100, analysis by the PA news agency shows.

So far in August more than 650 have successfully reached British shores via the dangerous Channel route.

Most of that number came between Thursday and Saturday, with at least 532 migrants arriving in the UK.

This comes despite Home Secretary Priti Patel’s vow last year that the crossings would have become an “infrequent phenomenon” by now.

She has recently sought to level blame at her counterparts on the continent as she revealed the UK and French governments were locked in a row over the interpretation of maritime law.

Yesterday it was announced that Ms Patel has tasked former Royal Marine Dan O’Mahoney with delivering her ambition of making the English Channel “unviable” for migrants in small boats.

Dover MP Natalie Elphicke has been calling for migrants to be returned to France irrespective of whether they are picked up in British or French waters.

She said on Twitter: “With a record number of people illegally crossing this year, all options need to be on the table.

“But whether it’s the Navy or whoever, dinghies should be returned to France, and the French need to stop boats leaving French shores in the first place.”