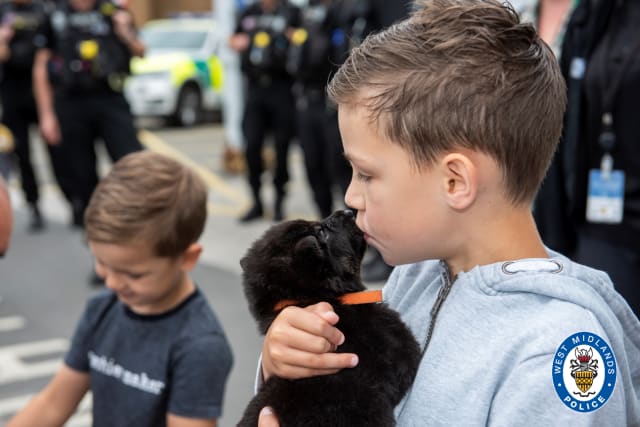 An eight-year-old boy with a degenerative condition was given a chance to be a police officer for a day as part of his “bucket list” wish.

Oscar Jealous, who was diagnosed with Batten disease in February, spent the day at Bournville Police Station in Birmingham, where he got behind the wheel of a police car, visited the cell block, and played with a litter of police puppies.

Oscar’s aunt Pc Laura Colclough, who works for West Midlands Police, said the eight-year-old had a “fantastic day” at the station.

“It’s heart-warming to see the smile on his face,” she said.

Oscar, who lives in Kingstanding, Birmingham, with his mother, father, and brother Charlie, was given a West Midlands Police warrant card as a memento of the day.

“Oscar and Charlie are both obsessed with the police – probably from having an auntie that catches robbers – so being a police officer was one of the first entries on his bucket list,” Pc Colclough said.

“Oscar has lost almost all his sight now due to his condition but there are lots of sounds in a police station to keep him entertained, not least the police car sirens and the slam of the cell door as he locked me up!”

Oscar’s “bucket list” also includes going on the set of his favourite TV show Tipping Point, flying in a helicopter, meeting Father Christmas in Lapland, and going up the Eiffel Tower.

Pc Colclough and her wife created a GoFundMe page to help Oscar achieve these goals and to pay for specialist care equipment, which has raised over £30,000 in donations.

“We are truly overwhelmed with the offers of support, many from people who don’t know us, and I cannot thank people enough for getting behind us to give Oscar some time to remember,” she said.

Oscar’s fundraising page can be found at GoFundMe here: uk.gofundme.com/f/oscars-bucket-list-of-dreams