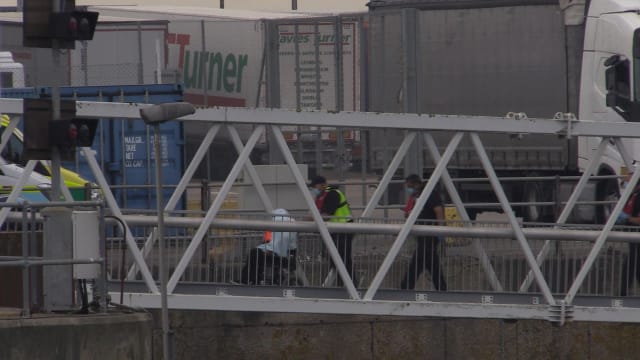 More migrants including a person in a wheelchair have been brought ashore in Dover on another busy day for Channel crossings.

Many wore blankets and lifejackets as they arrived in the Kent port aboard a Border Force boat on Saturday afternoon.

It comes after more than 130 migrants succeeded in making the perilous journey to the UK on Friday – a number that is expected to rise once complete figures are released by the Home Office.

Out in the narrow English Channel multiple Border Force vessels have been roaming the sea alongside Coastguard, RNLI and French forces since early this morning.

There are also reports that migrants have landed on beaches in Kent, something local MP Natalie Elphicke yesterday called an “unacceptable situation”.

Border Force customs cutter Seeker has been active in the Channel, joined by HMC Protector and patrol boat Hunter.

Officers were seen making multiple trips into the harbour in a fast rib-type boat carrying migrants, while officials waited up above.

The RNLI lifeboat was also seen leaving the port and heading out into the Dover strait.

Just a few hundred metres across the marina, dozens of beachgoers basked in the roasting 33C heat on another hot day in the South East.

Meanwhile, video on social media appeared to show more migrants landing on a beach further along the Kent coast.

Over in French waters, authorities have rescued at least 33 migrants and brought them back to Calais.

Patrol boats sailing under the Tricolour remain active in the Channel this afternoon.

At least 235 migrants made the dangerous journey across the Channel to the UK on Thursday – a new single-day record.

However at that time Border Force was still dealing with “a number of ongoing incidents”.

The Home Office has yet to provide complete and updated numbers for Friday or any details of Saturday’s crossings.