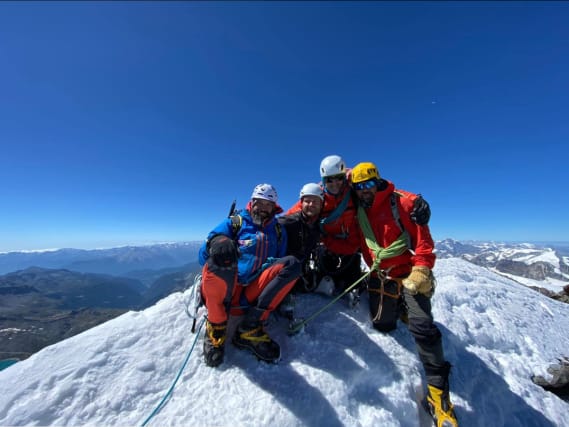 A former soldier who lost both of his legs in Iraq has become the first above-the-knee double amputee to summit the Matterhorn.

Neil Heritage, 39, along with friend Mark Hooks, 46, both from Poole, Dorset, successfully scaled the Alpine mountain on Friday after two previous attempts.

The two completed the climb alongside three guides on the Swiss side of the mountain.

Mr Hooks, director of a residential fitness bootcamp, said the experience was “unbelievable”.

“When we got to the top it was just so special, managing to achieve something we’ve worked so hard on over the years… it was very emotional,” he told the PA news agency.

Mr Heritage, who previously worked in bomb disposal, now runs a charity helping injured veterans with their rehabilitation, and has raised more than £6,000 for Climb 2 Recovery by reaching the summit.

He rowed across the Atlantic in 2012, and has attempted to summit the Matterhorn twice previously with Mr Hooks and fellow climber Steve Green.

The attempts were unsuccessful due to poor weather conditions, which Mr Hooks said made Friday’s successful summit “emotional”.

“The previous two times was why it was so emotional,” he told PA. “Three years of hard work.”

Mr Hooks explained that conditions were challenging, with Mr Heritage’s prosthetic leg falling off about 100 metres from the summit.

“There was a bit of a traffic jam at the top of the Matterhorn at the time, there were people clambering over,” he told PA.

“One of the guides came across as Neil was sat on the side of the mountain – that was a good 20-to-30 minute ordeal.

“We got it [the prosthetic] back on and made the summit. It was tough getting down after all the effort and elation of getting to the top, then the hard work starts.”