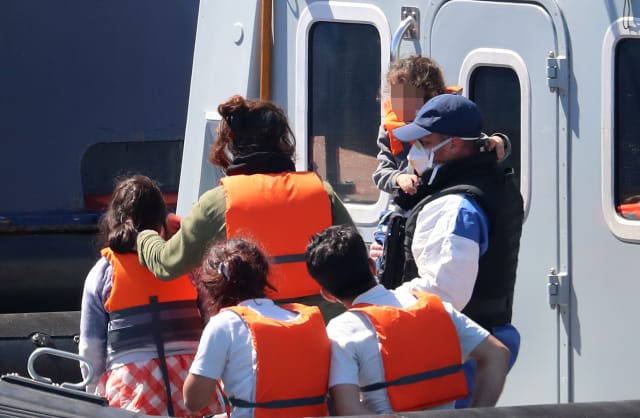 Young migrant children wearing lifejackets have been arriving in Dover after making the perilous journey across the English Channel.

The youngsters, some too young to walk, were seen being comforted as they were lifted out of Border Force boats and taken ashore on Friday.

At least 235 migrants made the highly dangerous journey across the world’s busiest shipping lane on Thursday in 17 boats, setting a new single day record.

Speaking to the PA news agency in Dover, local MP Natalie Elphicke says it is “absolutely essential” to stop the continued migrant crossings and that people picked up in UK waters should be returned to France straight away.

Several children including babies in arms could be seen sitting with family members aboard the Hunter patrol boat as it motored into Dover port this morning.

About a dozen migrants sat aboard the grey vessel wearing lifejackets, many also wearing face masks.

Earlier in the day migrants were seen being led onto a coach by Border Force officials.

Speaking to PA in Dover, not far from where the migrants were brought ashore, Ms Elphicke said more needs to be done to stop the crossings.

She said: “Putting an end to the small boats crossings crisis will only happen when migrants and traffickers alike know that they won’t succeed in breaking Britain in this way.

“For me that has three parts: firstly making sure that the boats don’t leave France in the first place, if they do leave French shores that they’re picked up early, and returned immediately to France and if people do break into our country and arrive on our shores that they are turned back to France.”

Asked about speculation that Home Secretary Priti Patel was considering drafting in the Navy, Ms Elphicke said: “There’s some discussion about the Navy, and what I’d say is that as we’ve gone into this record number of people crossing over this year all options need to be on the table.

“But whoever it is that’s involved what we must make sure is that boats are deployed not to bring people into this country but to return them to France and for the French to do more to make sure that those boats don’t leave in the first place.”

Ms Elphicke said the UK has an “incredibly important” role in humanitarian and asylum issues around the world.

She added: “What I don’t agree with is that we should be encouraging or allowing illegal people trafficking that actually preys on some of the most vulnerable people and puts them at risk of their very lives.

“What we’ve seen here in Kent, here in Dover and Deal, is we’ve seen an unacceptable situation of small boats actually arriving at the beaches, of people getting off those boats and roaming round the area and that’s very, very worrying and concerning for local residents.”