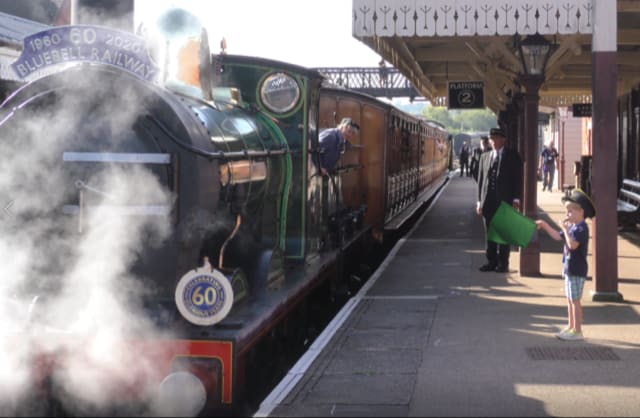 A train-mad six-year-old who emptied his money box to save his favourite steam railway has blown the whistle to signal its first journey out of lockdown.

Alex Venton wore a conductor’s cap and waved the green flag as the Bluebell Railway in Sussex started running again on Friday after a 20-week closure due to the pandemic – coinciding with its 60th anniversary.

The youngster, from Petworth, West Sussex, donated all his pocket money after reading about a fundraising drive by the heritage railway, which has been used as a backdrop in period dramas such as Downton Abbey and Poirot.

Delighted Alex was given a VIP tour of the railway’s locomotive workshop and exhibitions before taking a ride on the line with his mother, Sophie.

She said: “He read about the appeal in the railway’s newsletter and said ‘Can I give the money from my money box?’.

“I said ‘Are you sure you want to?’, because he had been saving up for a new coach for his train set, but he insisted he wanted to help.”

Bluebell Railway funding organiser Trevor Swainson said: “We were touched that Alex had emptied his money box because he loves trains so much and particularly his concern that the railway might struggle as it comes out of lockdown.

“We have had more than 2,500 donations to the appeal but it is stories like Alex’s that are particularly heart-warming and it makes us realise just how special the Bluebell Railway is to so many people.”

Opened on August 7 1960, the Bluebell was the first heritage line of its kind in the UK, and is made up of 11 miles of track running from Sheffield Park in East Sussex to East Grinstead in West Sussex.

Its four stations, which have original working signal boxes, preserve different periods in history including the Victorian era, the 1930s and 1950s.

The fundraiser can be found here: https://uk.virginmoneygiving.com/charity-web/charity/displayCharityCampaignPage.action?charityCampaignUrl=support-bluebell