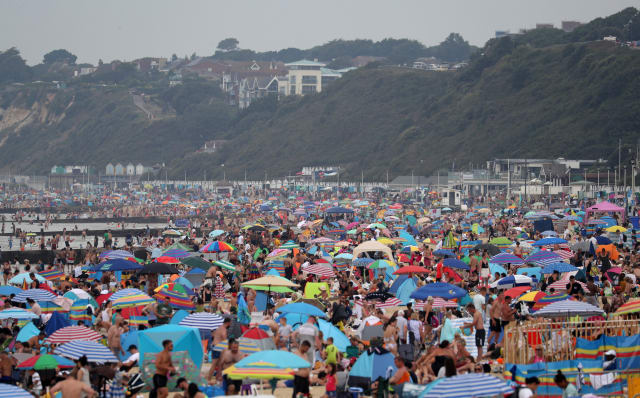 Sunseekers have been told to avoid some beaches along the southern coast that are rammed with people, as travel chaos is expected from Friday afternoon and this weekend.

By midday, the Coastguard said it had responded to dozens of calls and has urged the public to stay safe on the beach.

A heat-health warning has been issued as the mercury is set to rise to 37C (98.6F) in London and the South East on Friday, the second day of a heatwave expected to last until at least Sunday.

Hundreds of people descended to the coast across Britain on Friday morning as early as 9am, with crowds expected to grow throughout the day and continue in the weekend.

By Friday afternoon, Bournemouth, Christchurch and Poole Council’s beach check app showed 19 of its 24 beaches under red alert, warning people to avoid the areas as safe social distancing is not possible.

The remaining beaches were under amber, meaning they were congested and beachgoers should “stay alert”.

HM Coastguard said around 70 call-outs had been made across the UK by midday on Friday, which is “above average for this time of year”.

The Coastguard reported its busiest day for more than four years as it dealt with 329 incidents on July 31, when the UK recorded the hottest day of the year and the third warmest on record at 37.8C.

Matt Leat, head of infrastructure and technology lead at HM Coastguard, said: “The coast is very busy today and that’s grown across the morning and will continue to grow as the day goes on.

“Looking back to last Friday (July 31), we are going to hit that many number of call-outs potentially today and this weekend.”

For those planning to travel on their weekend break by car, The AA said it expects up to 10% more journeys from Friday afternoon.

Ben Sheridan, from The AA, said: “Motorways, coastal routes and roads to ferry crossings are likely to be busy.

“Many drivers will be hitting the road early to beat the heat, while others will stay home to stay cool.”

RAC Breakdown said it is expecting this weekend to be the busiest of the year for the company, as traffic jams and long delays look “inevitable”.

Drivers are being urged to check the oil and coolant levels in their vehicles to avoid breakdowns in the sweltering heat, as well as making sure tyres are pumped up to the correct pressures and have good tread.

Delays and cancellations are likely for rail passengers, as high temperatures can damage overhead wires and lead to speed restrictions due to fears of tracks buckling.

A buckled rail would usually lead to the line being closed while engineers wait until the temperature has dropped so they can carry out repairs.

Rail trade union RMT said on Friday that it is on red alert for a surge in passengers that may compromise Covid-19 safety measures.

It said train operators are planning for a surge in passengers from Blackpool to Southend and Brighton to Bournemouth.

“The combination of sun and alcohol is a clear threat to that.”