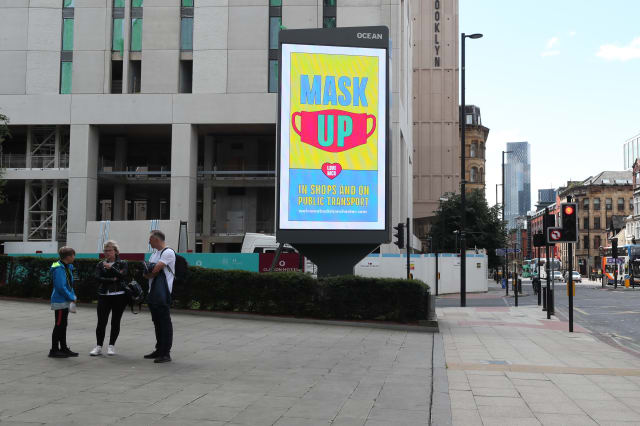 The Government is expected to make an announcement on Friday on the status of the local lockdown measures in the North West of England and Leicester.

Measures banning mixing between households were due for review on Thursday, a week after they were brought in for residents in Greater Manchester, parts of east Lancashire and West Yorkshire, as well as Leicester.

Local leaders in Preston warned on Thursday that it could become the latest area to face a Government intervention, amid rising infection rates in the Lancashire city.

Meanwhile, quarantine measures were announced on Thursday evening for travellers arriving into the UK from Belgium, Andorra and The Bahamas – with Britons advised against all but essential travel to the three countries.

The restrictions – which mean those arriving will have to self-isolate for 14 days – came into force at midnight in Wales, with the same rules applying in England, Scotland and Northern Ireland from 4am on Saturday.

The Times reported France could be next to face restrictions due to rising infections in the country.

The French health authority – Sante Publique France – reported cases of Covid-19 are up by a third (33%) in the week to August 6, and infection rates are increasing in all age groups, particularly 20 to 30-year-olds.

– The latest Test and Trace figures showed that local health protection teams continue to be more successful than call centre workers at reaching close contacts of people who have tested positive for coronavirus.

– Fifty million face masks bought by the Government as part of a £252 million contract will not be used in the NHS due to safety concerns.

The Government has also been urged not to shut down routine non-Covid care in hospitals again if a wider lockdown is imposed.

Professor Neil Mortensen, president of the Royal College of Surgeons of England, told The Guardian: “The NHS must never again be a Covid-only service.

“There is a duty to the thousands of patients waiting in need and in pain to make sure they can be treated.”

Dr Chaand Nagpaul told the paper: “We cannot have a situation in which patients are unable to access diagnostic tests, clinic appointments and treatment which they urgently need and are simply left stranded.”