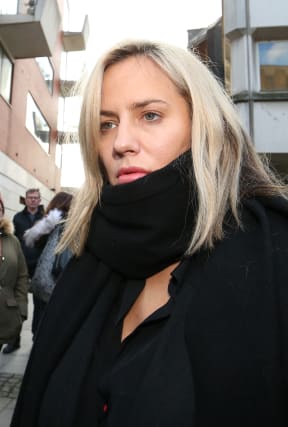 The mother of tragic television star Caroline Flack said police and prosecutors “had it in for” her daughter, accusing them of taking the former Love Island host to court due to her “celebrity status”.

Chris Flack said her famous daughter killed herself as a consequence of Detective Inspector Lauren Bateman’s personal decision to appeal against the plan to give Flack a caution for allegedly assaulting her boyfriend, Lewis Burton.

Mrs Flack accused prosecutors of wanting to proceed with the case, despite concerns about the 40-year-old’s mental health.

Speaking at Flack’s inquest at Poplar Coroner’s Court on Thursday, Mrs Flack told deputy chief Crown prosecutor Lisa Ramsarran: “After listening to you and the first lady (Ms Bateman), I feel even more that you had it in for Caroline.

“I now know how Caroline felt and it is not very nice.”

Ms Ramsarran said the code for prosecutors was correctly applied, while both the police and the Crown Prosecution Service said they would not do anything differently.

Flack admitted hitting Mr Burton when officers were called to her home in London in December 2019, saying she did so because she found out he was cheating on her, the inquest heard.

Prosecutors decided to charge Flack with assault after Ms Bateman, the Metropolitan Police inspector on duty at the time, contested their initial decision.

The inquest heard prosecutor Kate Weiss reviewed the decision to charge Flack a week after the assault.

She cited various factors, such as the violence involved, that Mr Burton was sleeping, that a caution is rare for a domestic violence case, and that police said Flack showed no remorse in interview, when making coming to the conclusion that a caution was not appropriate.

Ms Weiss wrote: “In light of these factors, I believe a caution is not appropriate.”

Coroner Mary Hassell said she understood if Flack’s family saw the review document and thought it “gives a flavour of wanting to find reasons to continue the prosecution rather than looking at this afresh”.

The coroner said: “It would be easy to gain an impression from this that for whatever reason Caroline isn’t liked – ‘She’s a celebrity and she must be dealt with severely’.

“I can understand why that impression could be gained by this document.”

Ms Ramsarran replied: “I don’t share your view that we are treating this defendant any different from anyone else.”

The inquest heard Flack’s mental health deteriorated and she killed herself in February 2020, weeks before she was due to stand trial.

In an impassioned examination of Ms Bateman’s evidence, Mrs Flack told Ms Bateman: “If it had been… an ordinary person, you wouldn’t have prosecuted.

“I just think you should be disgusted with yourself so there is nothing we can do to bring Caroline back.

“I hope in hindsight you do regret this.

“This girl killed herself because you put an appeal through.”

Ms Bateman denied the coroner’s suggestion that she was motivated by Flack’s celebrity status to charge her.

Ms Bateman said: “I was not biased and I treat everyone the same.”

The inquest heard Flack was found naked and covered in blood with a self-imposed cut to her wrist when police arrived on the scene of the alleged assault in December, and told officers: “I hit him (Mr Burton), he was cheating on me.”

On Wednesday, friends described how Flack had serious concerns about her trial in March, but had met with her lawyers on February 14 when she thought the case might be dropped.

However, it was then that her legal team outlined the CPS’s decision, made the previous day, to go ahead with court action.

Flack was found hanged at her home the following day.

Prosecutor Ms Ramsarran said the CPS looked at Flack’s mental health when the case was first reviewed, including evidence that the television personality self-harmed at the crime scene when she allegedly assaulted Mr Burton.

However, it was decided it was in the public interest to authorise a charge of assault by beating, particularly considering the domestic violence allegation.

Mr Burton said he did not support the charge, and said Flack “was not in a good place emotionally”.

No members of Flack’s friends and family were present in court for the two-day hearing.

Flack’s death prompted an outpouring of sorrow from celebrity friends, colleagues and fans, who referenced one of the former Strictly winner’s social media posts from December in which she urged people to “be kind”.

Her death was the latest connected to Love Island, following the deaths of contestants Mike Thalassitis, 26, in March 2019 and Sophie Gradon, 32, in June 2018.