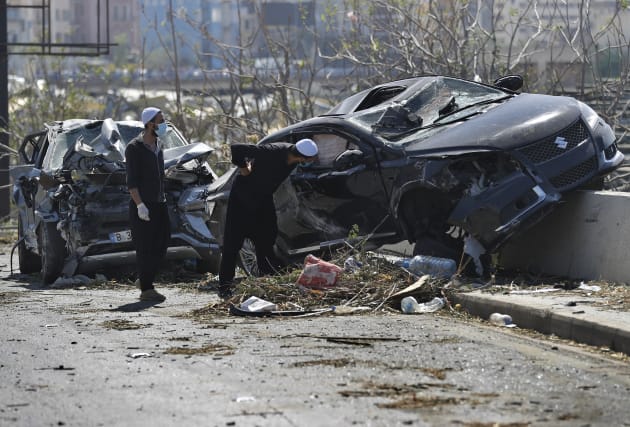 Lebanon has received messages of condolence and offers of support from around the world after a devastating blast rocked Beirut, killing at least 100 people and leaving thousands more injured.

There were no reports of British fatalities by late Wednesday afternoon, the PA news agency understands, as rescue workers searched for survivors of the explosion that rippled across the capital from its port.

The Queen was among those to send condolences to the nation’s president Michel Aoun, saying she and the Duke of Edinburgh were “deeply saddened” by Tuesday’s blast.

Prime Minister Boris Johnson said the UK Government is “ready to provide support in any way we can”, while the Foreign Office said it is “monitoring the situation closely”.

Government minister Nick Gibb said all embassy staff based in Beirut are accounted for, but some have suffered “non-life-threatening injuries”.

Labour leader Sir Keir Starmer said the UK must offer Lebanon “full support” to deal with the crisis, with the Government yet to set out its response.

The British Red Cross has launched an emergency appeal for Britons to support the relief effort.

Mr Aoun said the blast stemmed from 2,750 tonnes of ammonium nitrate being stored unsafely in a warehouse, amid suggestions the material was confiscated from a ship in 2013.

As many as 300,000 people may have been left homeless, Beirut’s governor Marwan Aboud said, with many buildings reduced to an uninhabitable mess of rubble and glass.

The Queen’s message to Mr Aoun said: “Prince Philip and I were deeply saddened by news of the explosion at the port in Beirut yesterday.

“Our thoughts and prayers are with the families and friends of those who have been injured or lost their lives, and all those whose homes and livelihoods have been affected.”

French President Emmanuel Macron is to fly to Beirut, while his nation has dispatched two planeloads of rescue workers and aid. Turkey is also sending rescue teams and emergency medical personnel.

There are concerns of food shortages and unrest in the city, with the blast compounding anger stemming from a severe economic crisis and the coronavirus pandemic.

Former Middle East minister Alistair Burt said he expects the tragedy to lead to “some degree of political shake-up” in Lebanon.

He told BBC Radio 4’s Today programme: “Whether or not something like this does bring the political processes in Lebanon together to appreciate they can’t go on as they are, that will be another thing, but at the moment I think we should focus on the disaster consequences, be as supportive as possible in relation to that.”

Donations to the Red Cross appeal can be made at: https://donate.redcross.org.uk/appeal/beirut-emergency-appeal