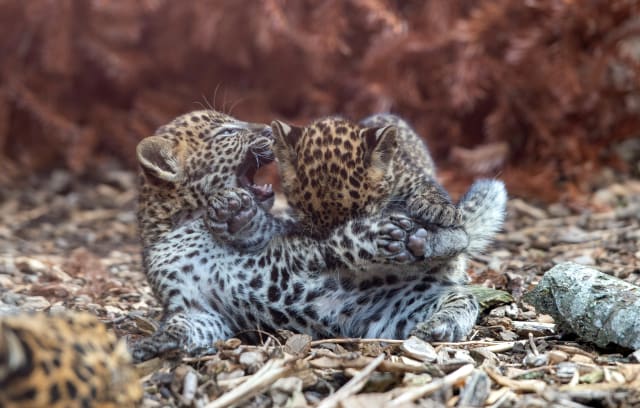 Two rare leopard cubs born during lockdown have been exploring their enclosure at a zoo.

The eight-week-old male Sri Lankan leopards were born to mother Sariska and her breeding partner Mias at Banham Zoo in Norfolk on June 4 while the attraction was closed to the public.

It reopened last month and the big cats, who have yet to be named, have been seen playing together.

Sri Lankan leopards are endangered in the wild due to hunting and persecution as a pest, with the current wild population estimated to be just 800.

Banham Zoo says on its website it is the first in the UK to breed Sri Lankan leopards and the big cats there are part of a European Breeding Programme.

The species is native to the island of Sri Lanka and are found in a range of habitats from open savannah to rainforests.

They are solitary except for the breeding season and can live for up to 20 years.

Leopards usually hunt at night for prey including wild boar, deer and birds.

They will often carry prey up a tree to keep it away from other predators.

Each leopard’s black spots are unique and adults can weigh up to 90kg (14 stone 2lb).

It is the second litter for Sariska and Mias, who previously had two cubs in 2017.

Sariska arrived at Banham Zoo from Bratislava Zoo in 2015, and Mias arrived the same year from Le Pal zoo in France.