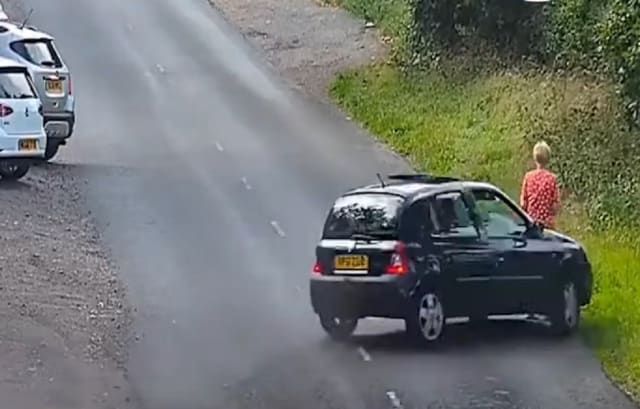 Shocking footage has been released of the moment a dog walker was mowed down and left for dead.

West Midlands Police released the video in an urgent bid to trace three people thought to have been in the car, who are shown on camera fleeing the scene on foot.

The woman, who was struck from behind, survived but her dog Millie died at the road side, police said.

Police release shocking footage of dog walker being hit by car and left for dead
Shocking footage has been released of the moment a dog walker was mowed down and left for dead.
The driver of the Renault Clio hit the woman after losing control of the vehicle
A man and a woman are among three people thought to have been in the Renault
A Vauxhall Astra which stopped nearby is thought to be connected to the Renault
A second male, left, is then seen running from where the Renault crashed
Up Next

Officers also want to trace a second vehicle, a black Vauxhall Astra, believed to be connected to the Renault Clio involved in the crash.

The incident happened as the woman was walking along Doe Bank Lane, Great Barr, on the outskirts of Birmingham, at about 5pm on Wednesday July 22.

The footage shows that as the blue Renault loses control in a cloud of tyre smoke, it crosses the carriageway and hits the woman on the opposite side of the road, before disappearing into undergrowth.

A black Astra, which had passed the dog walker moments earlier, is then seen stopping 30 metres up the road.

As it halts, two males get out of the passenger side looking back towards the scene, while a third person, still at the wheel, puts the car in reverse.

As the Vauxhall heads backwards, two men and a woman can be seen jogging back into frame from where the Renault crashed.

The Astra's road tax went out of date in June, according to the Government online checker.

A force spokesman said: "The crystal-clear CCTV footage shows a number of people running away from the scene.

"We're appealing to trace them, and need anyone with information to get in touch.

"We're also trying to find the black Astra that stops further down the road.

"We believe the two cars were travelling together and the people are probably friends with each other.

"Police are also trying to trace the occupants of this black Astra."

Anyone with information is urged to contact the force online, dial 101, or give information anonymously by calling Crimestoppers on 0800 555 111.