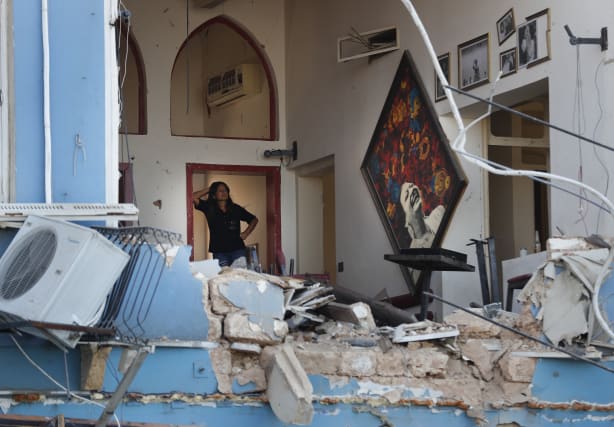 A British-Lebanese fundraiser has said the explosion in Beirut evoked memories of the Grenfell Tower fire as he urged Britons to aid those affected.

Oz Katerji, a journalist from London, raised more than £12,000 within hours of creating a GoFundMe page to help those affected, but believes more needs to be done.

“For me as a Lebanese person, watching the devastation unfold in Beirut was similar to the feeling I had as a Londoner of watching Grenfell Tower going up,” the 33-year-old, whose father is Lebanese, told the PA news agency.

“However, it’s not one tower, it’s half of the city that has had its world turned upside down right now.

“Luckily my family made it through shaken but OK, but what’s more important now is those who have been more profoundly impacted by the blast.

“Seeing neighbours suffering in this manner drives you to do things that you wouldn’t normally and help your fellow man – as we saw in London after Grenfell.”

Mr Katerji is fundraising for the International Committee of the Red Cross (ICRC), which is responding to the aftermath of the blast after it killed at least 100 people and injured thousands more.

Foreign Secretary Dominic Raab has said the UK is offering humanitarian assistance worth up to £5 million, along with experts and a Royal Navy survey ship to help assess the damage caused to the city’s port – the centre of the explosion.

“It’s a kind offer of support that is very much appreciated but unfortunately is a long way from being enough to support those suffering from the crisis, and that’s why we need to do more,” said Mr Katerji.

“People in the UK need to understand that Lebanon is not in a position where it can save itself… Lebanon is already at its point where it can’t take any more.”

There are concerns of food shortages and unrest in Beirut, with the blast compounding anger stemming from a severe economic crisis and the coronavirus pandemic.

Paola Rebeiz is from St Nicolas, a kilometre south of Tuesday’s explosion – she cannot stay in her home and lost a friend to falling debris.

“She was visiting another friend across the port having coffee… the glass ceiling blew and she got hit… she had three young kids,” the 52-year-old told PA.

“My other friends lost relatives, one lost his mother… a lot of people we know have been hurt, but they couldn’t even be checked into hospital because there is not enough space.”

All of the windows to Ms Rebeiz’s apartment shattered in the blast and it was left without power and water.

She had moved in just two days before the explosion but left late on Tuesday night to stay with a friend outside the city – before returning to clear up on Wednesday.

“It is very weird… in 24 hours, debris has become like the second nature of our people, there’s glass everywhere, shattered balconies, shattered windows,” she said.

“There’s ash, like in the Pompeii movies where you see this grey ash. It’s everywhere.

“I don’t know what to do… We’re all very angry, everyone is very angry.”

The British Red Cross has also launched an emergency appeal in response to the blast, donations for which can be made at donate.redcross.org.uk/appeal/beirut-emergency-appeal or by searching for: British Red Cross – Beirut Emergency Appeal.