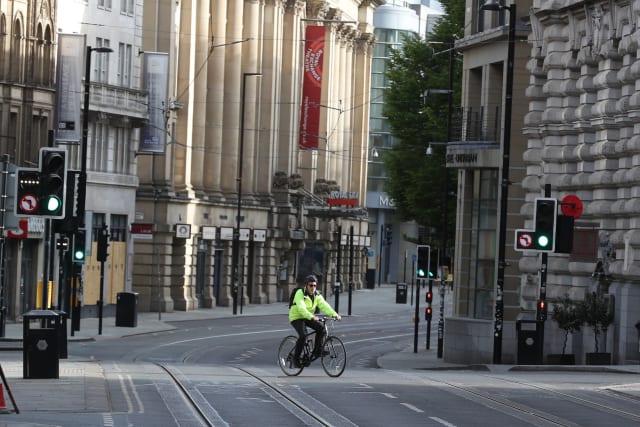 Laws enforcing lockdown restrictions in areas of the north of England including Manchester, parts of east Lancashire and West Yorkshire will be effective from midnight.

The Health Protection (Coronavirus, Restrictions on Gatherings) (North of England) Regulations 2020 were published on Tuesday afternoon and come into force on Wednesday.

Ministers had said the rules – which ban people from different households meeting in a private home or garden following a spike in coronavirus cases – would apply from midnight on July 31.

Anyone found flouting the rules could be fined £100 up to a maximum of £3,200 for repeat offences.

Officials refused to comment when asked why there had been a delay in imposing the laws and on what legal basis they had been enforced for the first five days of the measures.

Human rights barrister Adam Wagner, commenting on the legislation on Twitter, said: “They come into force and do not (cannot) apply to anything which happened before that.”

But the restriction zone could change at any time as directed by Health Secretary Matt Hancock, papers setting out the legislation said.

The regulations also amend existing laws for Blackburn with Darwen and Bradford, which means those areas are now subject to the same measures as well.

The towns and city were initially governed by less restrictive legislation which was made on Friday and came into force on Saturday.

Similar restrictions also apply to Leicester – which saw the first so-called “local lockdown” imposed on June 29 – after another set of laws was made on Sunday and brought into force on Monday.

The latest laws also prohibit people from meeting others from different households in areas outside the lockdown zone, such as at homes in nearby towns not subject to the rules.

And people cannot meet in groups of more than 30 in public places.

Critics have branded this the resurgence of the so-called “lockdown sex ban” because the law prohibits encounters between people from different households in their homes or other “private dwellings” and defines a gathering as “when two or more people are present together in the same place in order to engage in any form of social interaction with each other, or to undertake any other activity with each other”.

Mr Wagner described this as “crazy times where the criminal law is this intrusive on private rights”.

The ban does not extend to places such as hotels, campsites and guest houses or include other buildings such as care homes.

And there are exemptions to the rules, including: for those who have formed a support bubble and have become “linked” households; for people sharing childcare duties; in order to go to work; to attend a birth at the mother’s request; to visit a dying loved one; to fulfil a legal obligation; to move house, to care for a vulnerable person or escape injury, illness or risk of harm.

The restrictions must be reviewed once every 14 days and the first must take place by August 19.

But they could be in place for up to six months if not scrapped by the Government first.