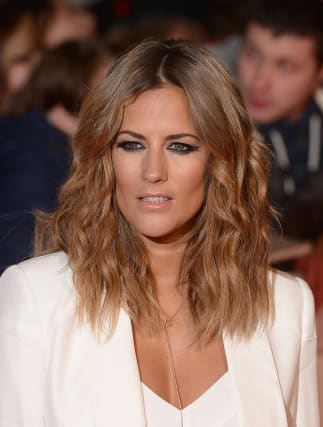 Caroline Flack’s rise to become one of the country’s best-known television presenters was initially so peppered with setbacks that she felt she may have chosen the wrong career path.

The 40-year-old became the face of The X Factor and Love Island, while victory as a contestant on Strictly in 2014 helped cement her status as television royalty.

But Flack said she was in two minds about pursuing her showbiz dream in her mid-20s, having been overlooked for several “cool” presenting jobs with the likes of MTV and T4.

“I did phone my mum when I was 27 because I still hadn’t really broken into TV properly, I had done bits and bobs,” she said in 2018.

“She said: ‘Even if you have, you can do whatever you want’.”

Caroline Louise Flack was born in north London on November 9 1979, minutes after her twin sister Jody.

The family soon relocated to Norfolk and she grew up near the town of Thetford, attending Great Hockham Primary School and then Wayland High School in Watton.

Her first job was as a daffodil picker and she trained to be a dancer as a teenager – a skill which was to reap its own rewards on Strictly years later – before moving back to London.

Having experienced only minor brushes with fame in the early 2000s – including as Bubbles on sketch show Bo’ Selecta – Flack’s big break came in 2009 as the co-presenter of ITV spin-off show I’m A Celebrity… Get Me Out Of Here! Now!

Around the same time, Flack found herself under the media spotlight for a different reason – her friendship with Prince Harry.

She would describe in her 2015 autobiography, Storm In A C Cup, that they “spent the evening chatting and laughing”, but “once the story got out, that was it. We had to stop seeing each other”.

Further scrutiny was to follow in 2011 when she struck up an unlikely and short-lived courtship with Harry Styles, singer in pop band One Direction, who she had met the previous year when he was 17 and competing on The X Factor and she was the 31-year-old co-host of companion show The Xtra Factor.

Their relationship triggered waves of criticism from the pop group’s young fanbase.

Further criticism was to follow, when she and Olly Murs were brought in as new presenters on The X Factor in 2015.

“That’s what it was like with Twitter. I knew all the comments were there but I couldn’t look at them.

“One day I did and it was horrible – I thought, you know what? Don’t look any more.

“You’re always going to find stuff like that, no matter who you are.”

In another interview, she further described the mental fortitude needed to deal with criticism.

“Everyone’s got an opinion,” she said.

“It can sometimes just be on what you’re wearing, how you look, things you say, how you breathe… you have to have a thick skin.”

Flack made her West End stage debut playing Roxie Hart in Chicago in 2018, while on the small screen she was in the midst of a long-running stint as the face of ITV2’s summer series Love Island.

In December 2019 came the incident which changed everything – Flack was arrested by police following an alleged assault on her new partner, former tennis player and model Lewis Burton.

Flack subsequently stood down from Love Island’s winter series and pleaded not guilty in court.

She killed herself, aged 40, on February 15, a month before she was due to face trial. Flack’s family said prosecutors had decided to go ahead with the case, despite serious concerns about her mental state.

In an unpublished social media post, shared by her loved ones posthumously, Flack revealed how she felt the “walls” she had built around herself had “collapsed”, and apologised to her family and friends.

In the aftermath of her death, colleagues, friends and fans sought solace in one of Flack’s social media posts from two months earlier.

“In a world where you can be anything, be kind.”