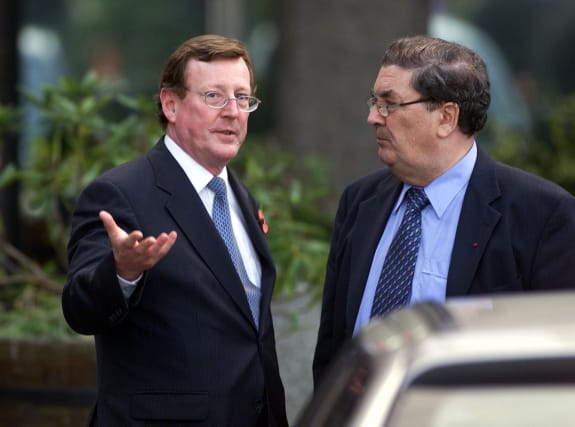 John Hume’s fellow Nobel Peace Prize winner Lord Trimble said the way they celebrated their award sent a signal of what a new Northern Ireland could look like.

Lord Trimble praised the former SDLP leader’s unwavering commitment to peaceful and democratic means as he paid tribute upon his death.

Mr Hume and Lord Trimble, then Ulster Unionist leader, were jointly presented with the Nobel prize at a ceremony in the Norwegian capital of Oslo in December 1998.

It was eight months after the political leaders played a pivotal role in forging the Good Friday peace accord that brought an end to Northern Ireland’s 30-year conflict.

After both men delivered lectures at the presentation ceremony, they retired to a city hotel with their respective party delegations.

Lord Trimble said what unfolded next demonstrated the significance of what had been achieved on Good Friday.

“When the ceremony was over and we retired to the hotel, we found that hotel was assuming that the one party would be in one room and the other party would be another room,” he told the PA news agency.

“We said no, we’re going to relax and celebrate the achievement together with all our companions that had come with each of the parties there.

“I think that was a clear signal to people about how we were going to proceed.”

As first minister, Lord Trimble led the new powersharing executive that emerged from the agreement alongside deputy first minister and then SDLP deputy leader, the late Seamus Mallon.

The peer, who described his working relationship with Mr Hume as “business-like”, said the principles the nationalist leader espoused from his early political career came to form the bedrock of the 1998 accord.

“Right at the outset of our Troubles, John made it clear that he was committed to democratic means and peaceful means,” he said.

“And those are the two basic ground rules for what resulted in the agreement of 1998 – it’s built on the same basic principles.”

Lord Trimble expressed regret that the funeral of Mr Hume will not be the “major occasion” he merited, due to coronavirus restrictions.

The peer expressed hope that other ways will be found to mark the achievements of his fellow Nobel laureate.