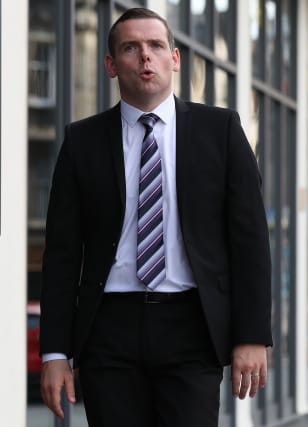 Douglas Ross has promised a plan for the economy “within the first month” of his leadership of the Scottish Conservatives to combat “the worst recession that this country faces”.

The Moray MP announced his candidacy for the party’s top job last week, with plans to contest a seat at the next Holyrood election in May 2021 if successful.

Ruth Davidson, who resigned as the Scottish Tory leader last August, would also be poised for a return to frontline politics as Mr Ross hopes she will front the party at First Minister’s Questions until then.

Speaking on the BBC’s Good Morning Scotland radio programme, Mr Ross criticised the Scottish Government for “ignoring economic concerns that are on the horizon” from the coronavirus pandemic.

Mr Ross said: “It’s a fresh leadership for the Scottish Conservative and Unionist Party and that’s something I’m keen to get with my strong team that’s in place and the stronger team we’re going to have in place after the next election.

“People in work and out of work are struggling, and that’s why today I’m focusing on the economy.

“Within the first month of my leadership, I will have a plan for the economy and I think it’s really worrying at the moment that Scottish Government are ignoring economic concerns, the worst recession that this country faces.

“We have already increased Universal Credit during this pandemic, I don’t think anyone can question the support and investment in Scotland and across the UK from the UK Government.

“What they can question is the economic policies of the Scottish Government and its own advisers.

“Jim McColl has said that the Scottish Government does not have an understanding of business; Duncan Bannatyne said he wouldn’t open a business again in Scotland because of the SNP, Nicola Sturgeon and her Government’s anti-business rhetoric that we’re hearing.”

He also reiterated the sudden resignation of former Scottish Tory leader Jackson Carlaw was not a “stitch-up” and did not have the involvement of anyone at Westminster.

In May, Mr Ross resigned as a Scotland Office minister over Dominic Cummings’s efforts to defend his trip from London to Durham during the coronavirus lockdown.

When asked if he would speak up against the UK Government if they went down a road he did not agree with, Mr Ross said: “Absolutely, I think you’ve seen that very clearly to the extent I gave up a job, that I thoroughly enjoyed doing, in the Scotland Office.

“I could not in all good faith look my constituents in the eye and support some of the actions of Mr Cummings took in his trip to Durham, and therefore I would have been asked to come on to your programme and others to defend that.

“I couldn’t do it and therefore resigned my role. However, I can be a strong independent voice and I think people have seen that in my actions.”