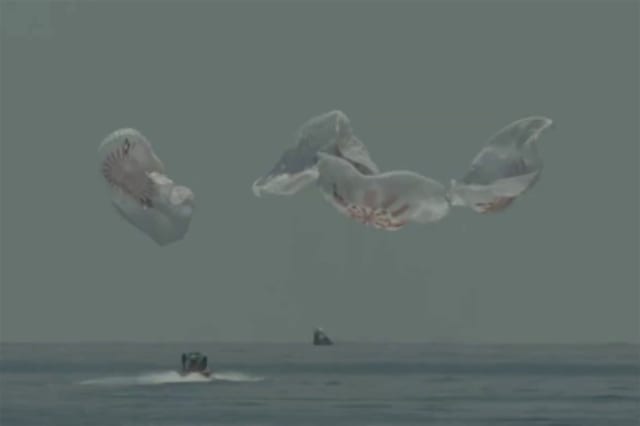 Nasa says it will need to do a better job in future of averting one unexpected offshoot of Sunday’s historic splashdown of astronauts – a rush of private boats which came too close to the spacecraft.

Several private boats were observed circling the area as Nasa astronauts Robert Behnken and Douglas Hurley successfully splashed down off the coast of Florida in the Gulf of Mexico.

The pair landed in the ocean near Pensacola in western Florida on Sunday evening, after a 19-hour journey.

Boaters appeared to sail close to SpaceX’s astronaut carrier, the Crew Dragon, as recovery crews raced to get to the spacecraft.

Nasa administrator Jim Bridenstine said the presence of these private boats “was not what we were anticipating”.

Speaking at a news conference after the splashdown, he said: “Of course, we wanted to make sure there was a clearing for them to land – the Coast Guard did an excellent job of ensuring that.

“And of course after they landed, the boats just came in – we need to do a better job next time for sure.”

Around a dozen private vessels near the splashdown area were asked to leave as they attempted to approach the spacecraft – creating a potentially dangerous situation as the Crew Dragon contains hazardous chemicals, such as hydrazine and nitrogen tetroixde.

Mr Bridenstine said: “What is not common is having passers-by approach the vehicle close range with nitrogen tetroxide in the atmosphere, that’s not something that is good.

“And we need to make sure that we’re warning people not to get close to the spacecraft in the future.”

Gwynne Shotwell, president and chief operating officer at SpaceX, added: “The lesson learnt here is that we probably need more Coast Guard assets and maybe some more SpaceX and Nasa assets as well.”

Mr Behnken’s and Mr Hurley’s homecoming was the first crewed splashdown in 45 years.

The last time astronauts made an ocean landing was in July, 1975, during an Apollo mission.

The duo made history on May 30 when they became the first people to launch into low-Earth orbit on a commercial spacecraft.

Their mission, named Demo-2, marked the first time Nasa had launched astronauts from US soil in nine years.

The splashdown has ushered in a new era for Nasa, which now has at least one commercial spacecraft ready to launch astronauts into space from US soil.

The ocean landing was the final step in the mission designed to test SpaceX’s human spaceflight system – including launch, docking, splashdown and recovery operations.

“We are entering a new era of human spaceflight where Nasa is no longer the purchaser, owner and operator of all the hardware – we are going to be a customer.”

The Crew Dragon faced scorching temperatures of around 1,900C as it entered the Earth’s atmosphere.

Although the space station orbits at around 260 miles above Earth, it took nearly a day for the capsule to splash down.

The Crew Dragon performed a series of manoeuvres to lower its orbit and get closer to the splashdown site.

It then deployed parachutes to slow its speed from 17,500mph to around 15mph before splashing down.

The aerospace company’s first operational flight is expected to take place in September, where a second Crew Dragon spacecraft will carry four astronauts to the space station.

The capsule that carried Mr Hurley and Mr Behnken into space will be refurbished and launched on SpaceX’s second operational crewed mission, Crew 2, due to take place early next year.

Another aerospace company Boeing is also developing spacecraft to ferry astronauts to the space station, as part of Nasa’s Commercial Crew Program.

Internal Market Bill a ‘step too far’ and Lords may reject it, Labour peer warns

H&M to shut hundreds of stores in online shift