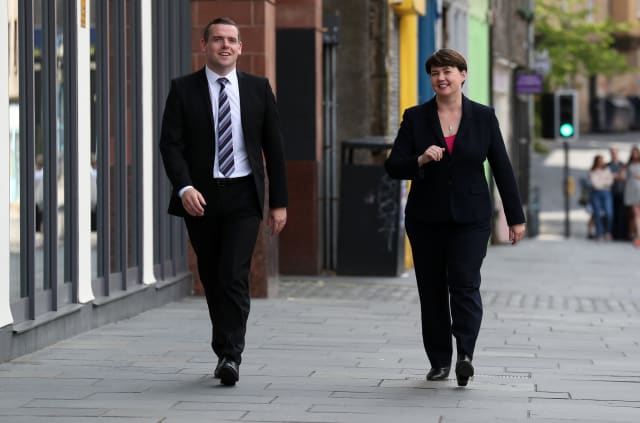 Ruth Davidson says she is “proud and excited” to call Douglas Ross her boss, as the Moray MP launches his campaign for the Scottish Conservative leadership.

Mr Ross said one of his top priorities would be to hand powers currently held by Scottish ministers to “local communities”.

At an event in Aberdeen, he said he had enough nominations from party members to formally begin his candidacy.

Ruth Davidson, who resigned as the Scottish Tory leader last August, is poised for a return to frontline politics as Mr Ross hopes she will front the party at First Minister’s Questions.

Ms Davidson, who is due to join the House of Lords when she steps down from the Scottish Parliament next year, spoke at the launch event in Aberdeen.

She said Mr Ross had asked her to return to the front benches to help the party’s “fightback”.

Referring to his role as a football referee, she said: “Like the dozens of centre forwards that he’s flagged offside down the years, I soon realised that challenging him – I was never going to win.”

Ms Davidson added: “I don’t want to labour the past but I do know a bit about party leadership. And I know how tough it can be.

“I know it takes dedication, determination, hard graft and 100% commitment to achieving your goals.

“Plus the strength of character to take the blows to brush yourself off to stick to the course.

“Douglas has these qualities in spades.”

She continued: “I’m not coming back as the leader of the Scottish Conservative party.

Mr Ross said the Tories would reach out to a “diverse coalition of Scottish voters” to beat the SNP.

He said: “Nicola Sturgeon is right, there has been a power grab. But it’s not been performed by the UK Government but by her own.

“Over 13 years too much power has been drawn into the SNP’s hands in Edinburgh and our regions, cities and towns have lost control.”

He added: “For many communities, in the north of Scotland, in the south of Scotland and around the country, Holyrood in Edinburgh seems as distant as Westminster did in the days before devolution.”

Asked about calls for a second independence referendum, he said: “We had that debate.

“We had that vote six years ago and we were told it was a once in a generation event.

“What I want to do is leave that in the past.”

Nominations for the post of Scottish Conservative leader will close at noon on August 5, the party has confirmed.

So far no-one besides Mr Ross has declared they will run to replace Jackson Carlaw, who announced his resignation on Thursday.