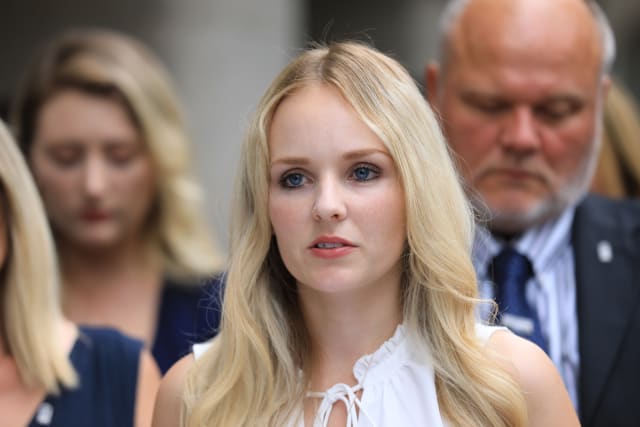 Pc Andrew Harper’s widow has described being in “a lost and endless world” after her husband was killed in the line of duty, a month after their wedding day.

Lissie Harper broke down twice as she read from her victim impact statement at the Old Bailey on Friday morning, ahead of the sentencing of teenagers Henry Long, Jessie Cole and Albert Bowers for his manslaughter.

Mrs Harper told the court: “This is my third attempt at writing a statement.

“I simply find myself in a lost and endless world.

“That’s the reason in particular this question defeats me – unless you have stood in my shoes, lost a soulmate, a beloved partner you intended to spend your life with – how is this grief possible to describe?

“I have used every word possible to describe this torture – indescribable trauma I have been forced to endure these past 11 months.

“I have cried and broken down.”

Mrs Harper told the court she felt “robbed” of her future with her husband, the 28-year-old Thames Valley Police officer she married four weeks earlier.

The pair were childhood sweethearts and had been in a relationship for 13 years.

Mrs Harper said: “Should I speak again of how we were robbed of our future or the plans stolen from us?

“Four weeks was all I had with my husband – four weeks to be called his wife.

“Every aspect of my life since Andrew was taken is bitterly different.”

She said the teenagers who were found not guilty of murder “took more than one life away that day, they stole the person I used to be”.

She added: “Every ounce of beautiful peace – gone.

“In answer to the question: how has Andrew’s death impacted me? You can be satisfied I am now a shadow of the person I once was.

“Andrew will never grace us with his smile – his compassion and selfless generosity.

“I will spend every day for the rest of my life with a hole that will never be filled.

“I search around for words to express my heartbreak, but each word is inadequate.”