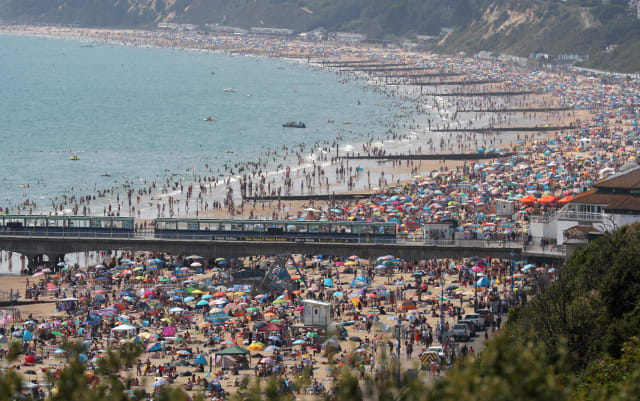 A storm warning covering much of England has been issued as temperatures soared to make Friday the third hottest UK day on record.

Forecaster Simon Partridge said: “This not only makes it the warmest day of the year, it also makes it the third hottest UK day on record.”

It comes on the day the Met Office warned climate change was exerting an “increasing impact” on the UK and data showed an “undeniable warming trend”.

The current temperature record was registered at 38.7C  (101.7F) at Cambridge University Botanic Gardens last year, while the second hottest day was 10 August 2003, when the mercury rose to 38.5C (101.3F) in Faversham, Kent.

Friday will see a marked turn in the weather in large parts of England, with the Met Office adding: “But it’s not blue skies everywhere. This afternoon will see cloud increasing in the west and the risk of thunderstorms in the east.”

A yellow weather warning has been issued from 4pm until midnight across large parts of east and south-east England where the weather will be at its hottest.

This includes chances of gusty winds, hail and “frequent lightning strikes” which could cause damage to buildings.

The Met Office said, although a large amount of rain is unlikely, some places may experience heavy downpours and receive as much as 15-20 mm of rain in less than an hour.

The storms will be caused by hot air moving in from mainland Europe, some parts of which will be cooler than the UK.

So far this month, the highest maximum temperature recorded was 28.5C (83.3F) on July 17, also at Heathrow Airport.

The UK has already surpassed 100% of the average monthly rainfall and only experienced two thirds (66%) of the expected sunshine for an average July, a total of 113.4 hours, Met Office figures show.

Cooler air is on the way for anyone who is not enjoying Friday’s hot spell as the weekend will see a cold front that sweeps the UK  in the next 24 hours.

The Met Office said temperatures will be back closer to average tomorrow, but it will still pretty warm in the southeast.