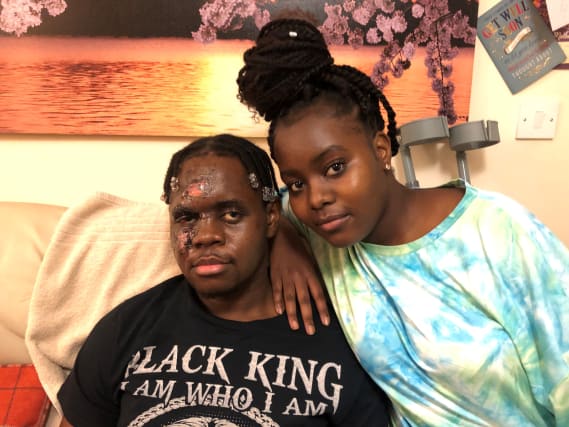 A racially-aggravated hit-and-run attack on an NHS worker is being investigated by officers “as a matter of urgency”, a police and crime commissioner has said.

The 21-year-old, who wishes only to be referred to as K or his stage name Kdogg, was walking to a bus stop after finishing work at Southmead Hospital in Bristol on July 22.

He was listening to Stormzy through headphones when a dark blue Honda Accord was deliberately driven at him, with two men then shouting racist language before running off.

K sustained serious injuries including a broken leg, nose and cheekbone, and has been left with permanent scarring – including pieces of grit and glass in his face – from the attack.

Sue Mountstevens, the police and crime commissioner for Avon and Somerset Police, described what happened as “appalling” and a “shocking and cowardly act”.

In her column in the Bristol Post, Ms Mountstevens wrote: “The 21-year-old man, who works at Southmead Hospital, has courageously spoken out about the physical and emotional impact this awful, racially aggravated, assault has had on him and his family.

“He said: ‘We will not let the haters win’ and I fully support this young man’s stance; hate crime of any kind has no place in our neighbourhoods, towns or cities.

“Our message is clear: hate crime of any kind will not be tolerated in Avon and Somerset.

“I know this shocking and cowardly act is being investigated by officers as a matter of urgency.

“Avon and Somerset Police will continue to support the victim and his family, and are determined to bring offenders to justice.”

Police are working with community leaders in the Horfield and Southmead area of Bristol as well as local authorities to reassure local people.

In his first interview since the attack, K said he was “just glad I’m still here breathing”.

The keen musician and footballer has been left unable to walk without crutches, only able to sleep sitting up in a chair and requiring regular hospital treatment for his injuries.

Doctors have said it will take a minimum of six months before K is able to do “most things” but it will take longer for him to be back to full fitness.

“I’m a strong character so every negative situation that happens to me, I try to think positively and have a better outcome out of it,” K said.

“I want to encourage other people that are going through this type of stuff to have faith that there’s going to be some change and have that type of mentality to bounce back from it because we can’t let these people keep us down.

“That’s what they want, we can’t let them win.”

He is being supported by the charity Sari (Stand Against Racism & Inequality), who have seen an increase in referrals to them for hate crimes in recent weeks.

In March, the charity received 56 such referrals but this reached 100 in June.

Hundreds of people have donated to a GoFundMe page raising money to support K and his family following the attack.

The page, set up by K’s football club, initially had a £5,000 target but donations reached more than £23,000 by Friday afternoon.

It can be found at https://www.gofundme.com/f/help-raise-money-for-nhs-member-of-staff?utm_source=whatsapp&utm_medium=chat&utm_campaign=p_cf%20share-flow-1&fblid=IwAR2fLeLnv5ezPvFaNkBypem4D30age2CTiUHIohz1qBmIDKonFJO4c2xeRI