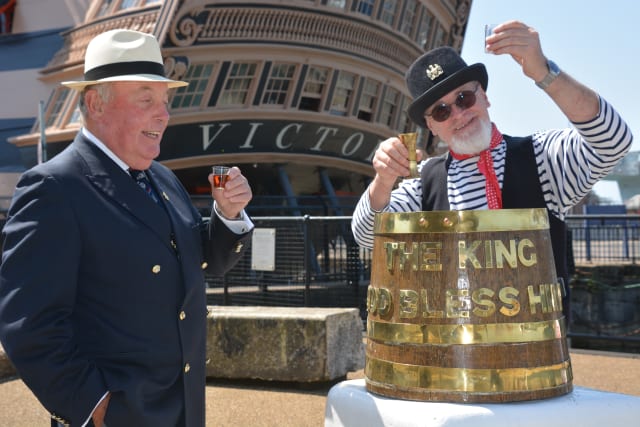 Veteran sailors have been gathering to mark the 50th anniversary of Black Tot Day, the day the Royal Navy stopped issuing sailors their daily rum ration.

The daily portion of rum, which was accompanied by the pipe Up spirits, was first issued to sailors in 1655 to replace beer as it was easier to keep on board.

Over time, the allowance was watered down and reduced in quantity because of drunkenness on board until in 1969 the Great Rum Debate was held in the House of Commons leading to the removal of the ration which was last served on July 31 1970.

The move was not popular with many ratings and some wore black armbands.

Adrian Bell, chief executive officer of the RNRMC, told PA: “The tot symbolised the coming together of people, they assembled on their mess decks, they got together, had the tot and continued their day.

“It is that camaraderie that was so important, so many of the Royal Navy family face social isolation and loneliness so if we can use this to inspire them to come together, either virtual or real, for the wellbeing of people, then that would be great.”

Vice Admiral John McAnally, national president of the RNA, told the PA news agency: “It was a great social occasion on the mess deck, it brought people together, and after hours on an open bridge, in an Atlantic gale, or a windswept upper deck or a fetid boiler room, it was a great tonic or restorer.”

He said the loss of the tot was met with sadness but also understanding and added: “By 1970 living conditions were better, bridges were enclosed, the breathalyser had come, equipment was ever more complex, we did replace it with a daily beer issue and a proper bar and a big fund called the tot fund.”