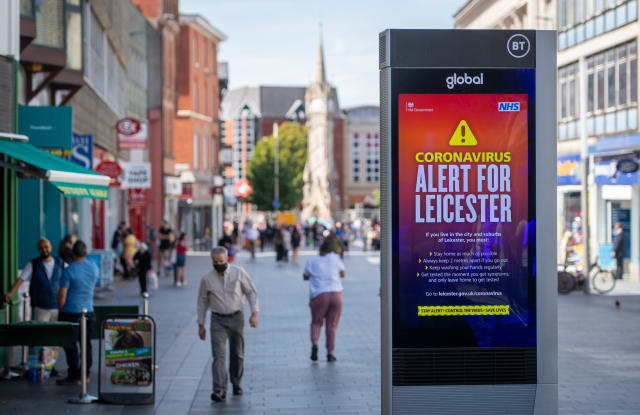 The mayor of Leicester said the city has been left “out in the dark, very frustrated and very angry” following the Government’s “shambolic” lockdown announcement.

Sir Peter Soulsby said Health Secretary Matt Hancock’s words were “an inadequate response to the last four weeks of lockdown we have had to suffer” – describing the decisions made about the city as an “afterthought”.

The Government announced on Thursday that pubs, cafes and restaurants can reopen in Leicester from Monday.

The Department for Health and Social Care said hairdressers, cinemas and museums would also be able to open, but social gathering restrictions would remain in place for the city, and leisure centres, gyms and public swimming pools would also remain closed.

All restrictions in neighbouring Oadby and Wigston will be lifted, the department added.

Giving his reaction to the Government’s announcement on Friday, Sir Peter said: “Once again, it was shambolic.

“What we saw yesterday was something that left us here in Leicester out in the dark, very frustrated, very angry.

“What the Government did yesterday, I can’t help but feel, was make it up as they went along and frankly that’s not the way to deal with this.”

Commenting on how clear he believed the Government’s announcement was, the Leicester mayor said: “I wish there was clarity.

“We’re beginning to get clarity but even now there’s a number of questions about travel and other aspects of this that haven’t been spelt out – and the people of Leicester are turning to me and the council and asking what can we do, and when can we do it.

“The answer to that is: we’ll let you know as soon as the Government tells us.”

Asked what information he specifically needed from the Government, Sir Peter said: “What we need is to understand what can open and when it can open, understand what we can do about meeting up with family and friends and where they can do that; and what is particularly unclear is what the travel restrictions are going to be.

“A lot of people are hoping that they can grab a bit of time to go for a summer holiday, and we’re not sure here in Leicester whether that’s going to be permitted or not.”

Asked if he had been in contact with local authorities in the North West affected by the harsher restrictions imposed on Thursday night, Sir Peter said: “I’ve had a lot of contact with local authorities and mayors from up and down the land – who have particularly expressed sympathy with what I’ve been saying all along about how difficult it has been to get useful data from the Government.

“We’re not getting everything we need and neither are they – and I think they are grateful that we have made so much fuss about that because it has meant the Government has started to provide that data to them and to us.”

Director of public health for Leicester Ivan Browne said the infection rate in the city had gone down to around 55 per 100,000.

Asked if he had been provided with a target number for Leicester to reach before it could be on the same level as the majority of UK cities, Mr Browne said: “We haven’t been given a specific number, but internally we have some trajectories that we want to hit.

“Obviously the first one is to get below that 50 figure, because that’s kind of an international figure, and then where I’d want to be by September is at 20 or below, and I think from there that would get us in the best position possible for winter that better reflects the national picture – below 10%.

“That’s what we’re setting as our local target and we’re pushing hard for that.”

Questioned on what more he needed from the Government to tackle the virus effectively, Mr Browne said: “I think one of the things they’ve given us is a degree of autonomy – so that allows me to focus on my key areas.

“I think it’s the same old thing, it’s resources to be able to do what we need to do. I need to make sure I have the testing capacity that I need – but I do recognise that lots of other areas are asking for that similar capacity.”

Asked what he believes has been the most effective measure to reduce the infection rate in the city, Mr Browne said: “I think there’s two things. The first thing is going to where people are – the door-to-door work. Absolutely labour intensive but we’re doing that seven days a week… we’ve got 500 volunteers.

“The other one I would say is the amalgamation of the national Test and Trace programme and our local response – so those places the national team can’t get to, and those names being passed onto us, means that we can follow them up using our local records.

“We’ve managed to find over 85% of those people where they would have been considered void before.”