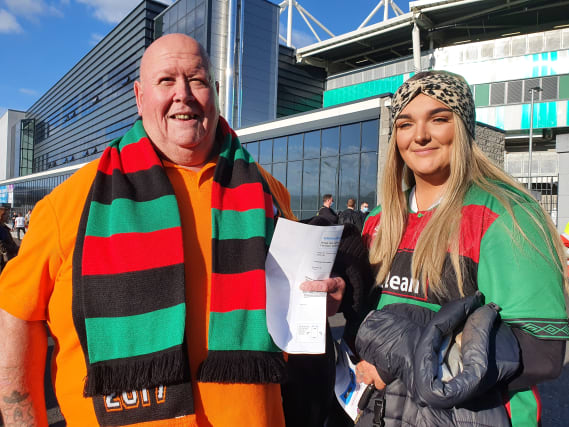 Hope has been voiced that Northern Ireland could lead the way for spectators to return to football matches as a limited crowd attended the Irish Cup final in Belfast.

Just 500 supporters attended the final clash in a season that was plunged into uncertainty amid the coronavirus pandemic at the National Stadium at Windsor Park on Friday night.

It was the first football match played in the United Kingdom since lockdown where the players got to be cheered on by their own supporters.

Fans were reminded to socially distance as they arrived by stewards wearing personal protective equipment.

Among the lucky few supporters to get a ticket for the Glentoran vs Ballymena United clash were Tommy and Sarah McKee.

The Glentoran fans described returning to a match as “absolutely brilliant”.

“It’s just a pity there is only 500 getting in tonight, obviously at the end of the day they are taking steps but we were lucky enough to get tickets,” Tommy told the PA news agency.

“They (the players) will certainly hear us okay.

“We’ve got masks with us, but we’ll all be separated and the stewards are doing a good job, they’re getting plenty of information out about what they want us to do so everyone just has to follow it. It’s strange circumstances but you just have to do what you have to do.

“Hopefully if this goes well, we’ll get a few more into the grounds next time.”

Matthew Armstrong was among the Ballymena supporters, and voiced hope that Northern Ireland could leading the way in getting spectators back to football matches.

“Our last competitive match was sometime in or around the first week of March before the season was curtailed due to coronavirus, and at one point we didn’t know when it was going to be back,” he said.

“So we were glad that whenever it did come back it was a match that involved us, and then even more excited when we beat Coleraine in the semi final on Monday to get to the final.

“Obviously in normal circumstances we would have way more supporters in the ground, for those inside the stadium it will be a special occasion.

“I’m sure the eyes of the rest of the United Kingdom will be on the match in terms of how things are done by the Irish Football Association, the two clubs and the supporters. Hopefully it can set the standard of a way that supporters can return to football in a safe manner sooner rather than later.

“There has been a lot of diligence and work going on behind the scenes to make sure it is as safe as possible for everybody, if it goes well this evening, I don’t see any reason why supporters can start coming back because without supporters football clubs can’t operate and it as simple as that.”

The Mid and East Antrim councillor said there was “no atmosphere at all” without the supporters.

“Sometimes I think players feed off the energy that is generated by a crowd,” he said