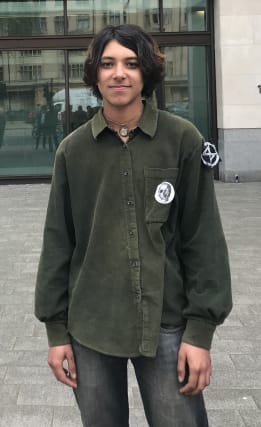 A Government legal bid to have an HS2 protester jailed for allegedly breaching an anti-trespass injunction has opened at the High Court.

The Transport Secretary and HS2 Ltd have brought a case to have 22-year-old Elliott Cuciurean committed to jail.

It is alleged Cuciurean was involved in 17 separate incidents during work to clear what environmental campaigners have said is ancient woodland at Crackley Woods, near Kenilworth, Warwickshire, earlier this year.

HS2 Ltd has claimed Cuciurean’s actions breached an injunction on an area of land within an 8km (4.9-mile) perimeter.

But lawyers for Cuciurean have alleged there was “confusion” on the ground as to where the land covered by the court order was.

Cuciurean also claimed he was never informed of the detail of the injunction, during his time on the site.

Video recorded from the site by High Court enforcement officers showed Cuciurean on top of a mechanical tree lopper and, in a separate incident, being removed from a tree with the help of a cherry-picker.

On another occasion he was arrested after allegedly trespassing into another “sterile” area, where an HS2 work party was operating.

Cuciurean was described in court as “a very active protester”.

Giving evidence at Birmingham High Court on Friday, Cuciurean confirmed he arrived at a protest camp neighbouring the site on the night of April 4, and walked some of the HS2 site perimeter.

“I just like to wander round and keep an eye on things,” he said.

Asked by HS2 Ltd’s barrister Michael Fry: “During your walk did you see injunction warning notice in the wooded areas?” Mr Cuciurean replied: “No.”

After video was played of another incident, he was asked by the judge if he had moved any site fencing.

Cuciurean replied: “I have moved fences in that area.”

More footage was then played in court showing Cuciurean 30ft up in the air, having climbed on to the arm of a mechanical tree cutter.

Mr Justice Marcus Smith asked him: “Why did you go up in first place?”

“To stop the work,” replied Cuciurean.

The judge then said: “This looks really quite dangerous – you really feel that strongly about preventing HS2, that you put yourself in physical danger?”

“I didn’t actually consider the dangers of it,” he added.

“It is more a reaction to ‘this machine is going to continue cutting down trees so I will do what I can to stop it’.”

On Thursday, Mr Justice Smith heard from Gary Bovan, a High Court enforcement officer who was at the woods throughout April.

He described Cuciurean as “very busy on site”.

Mr Bovan said: “That’s his modus operandi, he’ll go and find out all of the site, work out weak places and hotspots.”

“He’s a very active protester, so to know where he is and what he is doing are very important for our team,” said Mr Bovan.

Adam Wagner, Cuciurean’s barrister, asked Mr Bovan if he ever handed a copy of the injunction or explained the court order in full to the protester.

Mr Bovan said he had never personally given Cuciurean a copy of the injunction or the map attached to the court order.

However, Mr Bovan said he would explain the injunction notice to protesters and that copies of the map were pinned up around the site.

He said: “There are 20-30 people rotating in these protest camps and it’s not my responsibility to individually serve each one with a copy of the injunction or writ.

“My purposes is remove or stop trespassers coming on to the land.”

Mr Bovan said there was a perimeter which was secured by fencing which showed the boundary of the land covered by the injunction and there were also red “anti-trespass” signs staked in the ground on and behind the perimeter fence line.

He described how HS2 contractors clearing trees would then work behind an inner ring of fencing that had to be moved each time they relocated, because of incursions by protesters.

However Mr Bovan added the perimeter was “not entirely fenced”.

Mr Wagner asked if there was “general confusion” for anybody coming on to the site who could have mistaken the inner fencing for the outer boundary.

Mr Bovan replied: “No, because you’re seeing a snippet.

“We have advanced (the inner fence) over this period and these protesters have all been present at the time, so they’re fully aware of this internal working zone fence moving.”

Judgement is expected to be reserved until a later date.