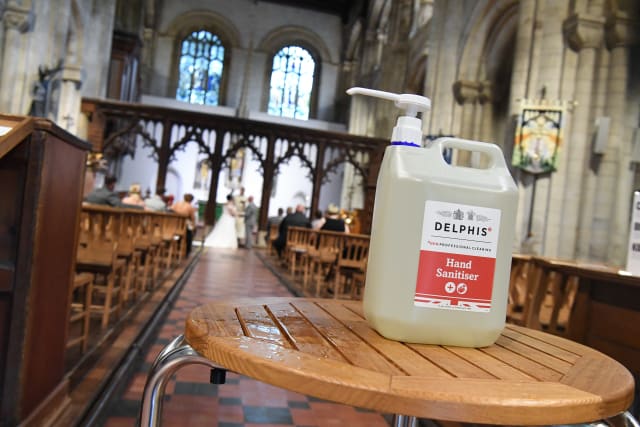 Friends and families looking forward to attending weddings in England have reacted with anger and disappointment at the news that receptions can no longer take place.

Boris Johnson made the announcement on Friday afternoon and acknowledged that it would be “a real blow” to those who had made plans.

Wedding ceremonies can still go ahead but plans to allow receptions for 30 guests have been scrapped.

Graham Podesta, 53, said his daughter Jamie, who is due to have her wedding on Saturday August 1, was in “floods of tears” following the announcement.

“Literally we’ve got 24 hours to pull the plug,” he said.

“We have to tell people who are travelling not to travel, people who have booked into Travelodge not to do that, it’s just a whole nightmare.

Speaking to the PA news agency an hour after the Prime Minister’s announcement, he said: “We had an email from the caterers about 20 minutes ago talking about the arrangements for tomorrow.

“They haven’t even caught up with the announcement.

“We were supposed to be going there this afternoon to drop off the cake and get things sorted, but I’m not sure they’re even aware of it.

Mr Podesta, from Gillingham in Kent, said that he was particularly frustrated by the lack of compassion from the Government, having given no advance warning of the new measures.

“The poor kids are desperate to be married,” he said.

“This is supposed to be a momentous, special occasion for the pair of them. It’s very frustrating.

“I understand (the Government’s) reasoning, I don’t agree with their methodology.

“They need to give notice. They can’t just spring upon a bride within 24 hours that her wedding has gone out of the window.”

Other wedding guests have expressed their sympathy for disappointed couples, and frustration at the Government’s decision, online.

Lucy Knight, said: “Looks like the wedding reception I’m supposed to be attending next week won’t be happening…

“Devastating news for the couple who have spent the last week sorting everything for their 30-person party after their planned wedding in May was cancelled.”

“No cases around here! We are officially the lowest area.”

Despite the disappointment, some guests acknowledged the need for precautions.

Twitter user @nathandelune said: “We all have to do what’s best for everyone’s safety, so we’ll just have to do it in the future.

“(The bride and groom) are still getting married luckily which is the most important thing, but we can’t celebrate with them afterwards.”

Man who died in church grounds was fatally kicked in the head, police say